The Mt Dimer Project, including the mining lease (M77/515) and an exploration licence (E77/2383), together with the Yarbu and Rover projects, form the Company’s Archaean gold property in WA. Earlier in November 2020, TSC completed the acquisition of the projects. 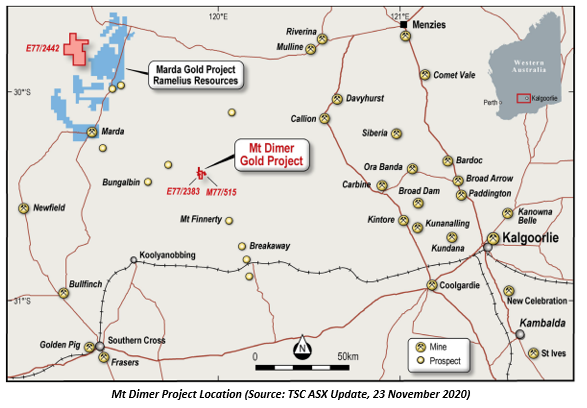 During last month, Arvista Pty Ltd completed the aerial drone survey at the mining lease to deliver a high-resolution ortho-mosaic image and Digital Terrain Model (DTM). It accurately surveyed the most prominent features of the mining lease including the open-cut pit, the tailings storage facility (TSF), the heap leach pad (HLP) and the waste dump. Moreover, 22 drill collars were precisely surveyed.

The data from the aerial survey will be utilised towards the 3D modelling of the open pit mining operations along with the drill hole data and geology to identify the drill targets.

The Mt Dimer Mining Lease includes an open pit mining pit, which was excavated to a depth of ~50 metres in 1990s producing ~8,500 ounces of gold. Historical drilling and open pit mine highlight a potential for a south plunging gold shoot to extend at depth beneath the existing open pit. Historical drilling program recorded gold grades up to 13.32 g/t of gold. 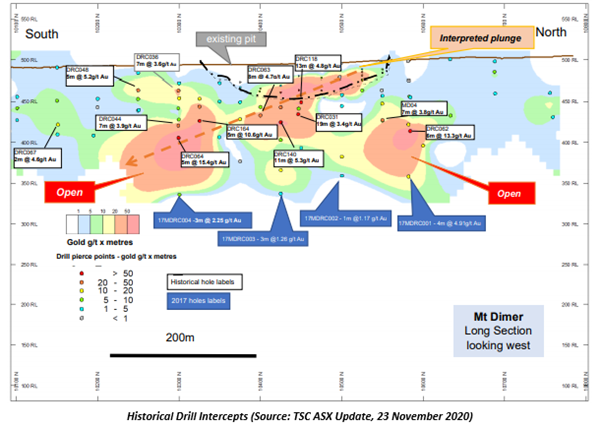 TSF Sampling: An initial sampling program comprising of 12 grab samples was concluded at the TSF. The assay results of the sample are encouraging and range from a grade of 0.13 g/t to 1.19 g/t gold. The average assay gold grade for 12 samples stood at 0.41g/t, outlining the high-grade potential of the TSF.

The historical records highlighted the milled production of 84,159 tonnes of ore at Mt Dimer with the operations closing in 1996. A more detailed auger sampling may be required to better understand the depth of the tailings, average gold grade and test samples for metallurgical test work. TSC has initiated discussions with external parties to evaluate the economics of the tailings storage facility generating early cash flow from the gold project.

HLP Sampling: A heap leach pad from the historical mining operations is located south-east of the open pit mine. Nine grab samples were collected from the heap leach pad which resulted in gold grades ranging from 0.24 g/t to 1.08 g/t gold and averaged at 0.51 g/t gold.

The volume of the heap leach pad and the tailings storage facility was estimated from the aerial drone survey. The heap leach pad resulted in volumes of ~ 6,750m3. The results indicate the need for a detailed sampling and assessment program at the HLP, along with the TSF study.

Twenty Seven Co. plans to progress on the priority tasks in the upcoming few weeks at the Mt Dimer Mining Lease, including: