Manganese, one of the most abundant elements in the earth’s crust, is the fourth widely used metal with almost 90% of the entire supply being directed towards steel production as an alloying agent. Also, no satisfactory manganese substitute has been identified which delivers similar outstanding technical advantages like the ability to combine with sulphur and the powerful de-oxidation capacity.

Read here to know more on: Manganese, A Critical Mineral with Versatile Applications

The United States alone imported manganese products worth over US$46.8 million from Australia during the period between January and September 2020, according to the US Geological Survey’s Mineral Commodity Summary for September 2020. While this data does not give a global picture of the manganese market, it does give an honest picture of the demand for the commodity and the role of Australia in the global scenario.

The Company, majorly focused on exploring the Northern Territory and Queensland for multicommodity mineralisation, envisions to create further wealth for its shareholders through capital growth and ultimately, dividends. To achieve the goal, the Company focuses on exploring for and developing viable mineral deposits to generate robust mining or joint venture income.

Recently, Eclipse Metals announced the discovery of further unknown near-surface manganese mineralisation at the Amamoor prospect in the Mary Valley Manganese Project. Some of the best intersections from the recent drilling program included- 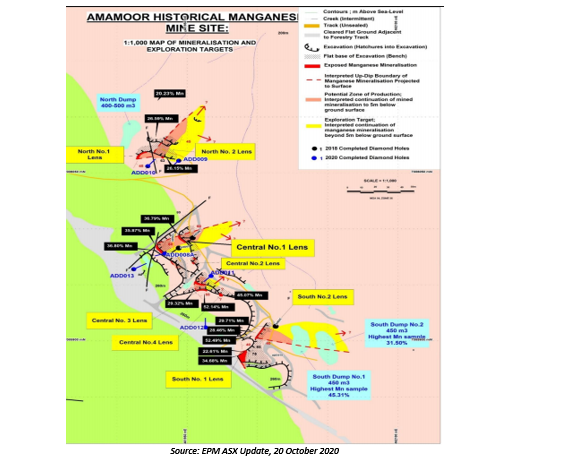 The beneficiation method for manganese ores typically applies basic physical processes such as comminution of manganese ores, scrubbing, screening, heavy-media gravity and gravity separation along with optional ore sorting methods to produce high-quality concentrates. A raw feed with only 7 to 10% MnO grade may be used to produce a high-quality commercial production with a grade of 35 or 40% MnO.

The ability to easily upgrade manganese ores enables the adoption of larger-scale bulk mining methods rather than selective mining which limits the potential mineable resource. This is the objective of Eclipse Metals.

Eclipse Metals has planned a sampling program to collect the samples of manganese mineralisation from the historical mining centres for metallurgical and beneficiation testwork. Additionally, a complete assessment of all previous and recent drill intersections has been planned.

(All financial information pertains to Australian dollars unless stated otherwise.)