ASX-listed minerals exploration and development company, Renegade Exploration Limited (ASX:RNX) has had a quarter (ended 30 September 2020) full of material progress across its project portfolio. Moreover, these activities continue at a more aggressive manner into the fourth quarter of CY2020 for RNX.

The significant set of activities undertaken by RNX during the quarter include the following:

At its Yandal East Project, RNX received results from its initial RC drilling program at the Ward prospect, where only six holes for 1,087m were completed out of a proposed 1,500m program due to rig and personnel constraints.

RNX concluded all holes at the Ward Prospect, where broad mineralised zones intersected across all holes and several ended in mineralisation.

Some of the notable intersections, as reported by RNX, include the following:

RNX has recently concluded this program and is currently inching towards finalising interpretation with preliminary data review. This shall offer encouragement as new structures are expected to be highlighted along with the identification of drill targets.

Presently, RNX is progressing to conclude a key geological review of all recent and historical data in search of and not just limited to gold potential. RNX shall also investigate into nickel and base metal prospectivity which have been explored for historically by numerous key mining companies.

RNX strongly believes that the review of this data related to drilling, geophysical and groundwork coupled with modern exploration techniques, shall enhance the understanding of the geological setting and targets for drilling. 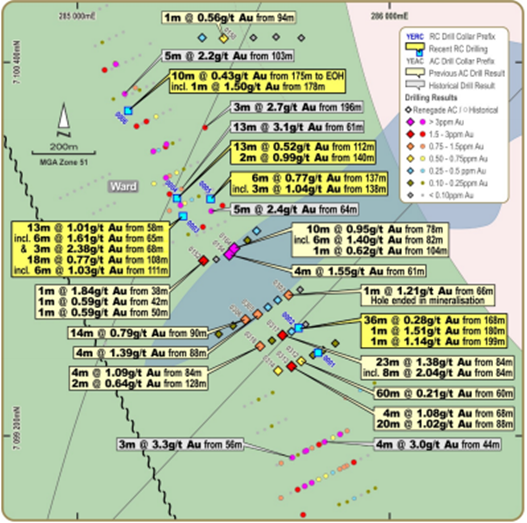 Acquisition of Yukon Base Metal Project

For quite some time, RNX had been in discussions with several parties regarding the acquisition of Yukon Project. Lately, during the September 2020 quarter, RNX progressed to conclude negotiations with an investor group seeking to acquire the Yukon Project.

As per RNX’s announcement on 5 October 2020, a Letter of Intent (LOI) has been inked between RNX and Scarfe Holdings Inc of Vancouver (Scharfe), Canada in relation to the acquisition. The terms of the LOI include the following:

Detailed discussion at: Renegade Exploration (ASX:RNX) Intends To Off Load Yukon Base Metal Project, A Glance At The Project

During this busy quarter, RNX’s exploration activities compelled an expenditure of approximately $179,000, while no expenditure on mining production or development activities was incurred during the same time frame.

Moreover, payments made to related parties (director and consulting fees payable to non-executive directors) of the Company totalled around $45,000.

Moving ahead, RNX remains on track with review and assessment of new opportunities for its business, predominantly centred around the gold sector, and the Company’s Board is committed to generating value by acquisition or organic development.