Greenland Minerals Limited (ASX:GGG) has received encouraging results from the recent advanced locked cycle flotation test work. The results demonstrate significant recoveries in mineral concentrate. 87 % of the light REs, as well as 68 % of the heavy REs, were amassed into a mineral concentrate. This concentrate assays 23.3 % RE oxide (REO). Besides total REO recovery was reported to be 85% (earlier 80%).

Appreciably, the increased recoveries are likely to increase Kvanefjeld Project output and profitability, according to the company. Besides, development of the flotation circuit has also involved a further investigation of the removal of excess fluoride ions in the process water. Increased fluorine removal is likely to further reduce environmental impacts.

Technical work programs on Greenland Minerals’ emerging world-class RE Project have delivered strong progress through 2020. The focus remained primarily on the continued development of the flotation circuit along with impurity removal in the refinery circuit. 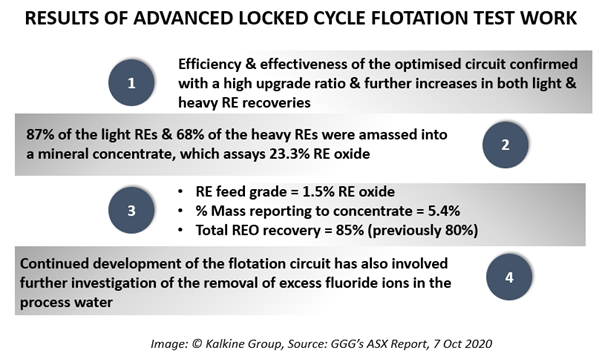 The locked cycle flotation test work results confirm the remarkable performance of the optimised flotation circuit. The circuit is believed to have the capability to concentrate the REs into a far smaller mass relative to the original ore. Subsequently, this allows for a small refinery circuit for hydrometallurgical treatment, according to Greenland Minerals.

Breaking this down further, the RE minerals can be effectively processed in a single-stage atmospheric acid leach circuit. Impurities can be well managed, enabling the production and export of a clean intermediate RE product, as per the company.

There is another significance that can be derived from the recent results, pertaining to the removal of excess fluoride ions in the process water.

Reportedly, the fluoride comes from the soluble mineral villiaumite, present in the ore. Configuration changes to the flotation circuit enable larger fluoride removal before the main RE flotation stage. The fluoride will be recovered as fluorspar (metspar). 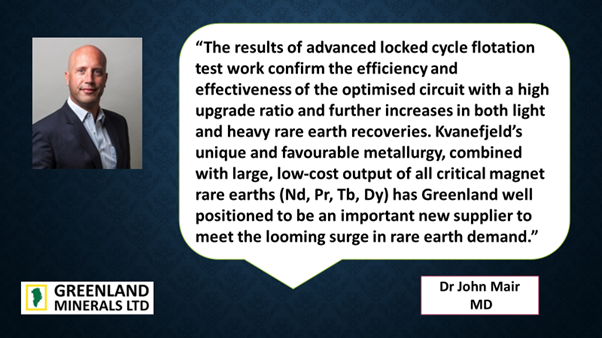 For Greenland Minerals, this advanced floatation test work has been underway across 2020 at the BTMR Laboratories, China. The Company’s largest shareholder and globally renowned RE specialist Shenghe Resources Holding Co Ltd was overseeing the test work.

The locked cycle test work finished several cycles of tests via the planned commercial circuit. The test work included the recycling of process water to ascertain the effect of residual reagents in solution on flotation performance.

Greenland Minerals emphasises that this is a significantly closer representation of the commercial flowsheet relative to prior test work and further de-risks the process.

8 full flowsheet cycles were used to certify a steady state. Samples were taken over the entire flowsheet in the course of the 8th cycle to deliver a ‘snapshot’ of the circuit performance.

The Company informed that further enhancements in fluoride removal are anticipated with ongoing process development. Meanwhile, the process development has progressed to the extent where conditions comparable to that of a commercial plant are to be tested.