The ever-expanding role of the Chinese economy in the world trade market is typically steered by its domineering exports and imports volume. The metallurgical coal market is no exception, with China importing largest amount of coal across the globe.

China in the recent past has hastened to gear up its economy on the back of infrastructural development; metallurgical coal market seems to be brimming with momentum. Steel production regarded as the backbone to infrastructural progress picked up pace shifting the focus to metallurgical coal, which is now massively demanded by steel manufacturers.

However, the supply complications are expected to be a critical agenda given recent China’s bans on coal exports from Australia. Meanwhile, trade tensions remained rampant between China and the US, which is the third-largest coal producer.

As China lock horns with two prominent coal producers, its search for an alternative source of coal is expected to intensify. It presents a further round of exciting opportunity to Mongolia, typically known for its vast expanse of coal reserves.

At the same time, Mongolia-based large scale, world-class Ovoot Coking Coal Project (OCCP) which is 100% owned by Aspire Mining Limited (ASX: AKM) appears to be positioned well to capitalise on additional lucrative prospects for the country.

Mongolia, a landlocked country having close proximity to China is expected to become one of the preferred alternative hotspots of coal reserves for the world’s second-largest economy. Transportation factors play a critical role in the coal pricing and therefore impact the overall value of trade. Both the countries, adjacent to each other are directly connected via roads, facilitating the convenient transportation of coking coal, thus reducing the burden of transportation cost of coal to a significant degree. It meanwhile also enables the Ovoot Project to take advantage of its geographic position.

Improving Ties Between Mongolia and China

The visit of China’s foreign minister, Wang Yi, to Mongolia during Mid-September 2020 has further pivoted the focus to strengthening bilateral relations between the two countries. Wan Yi expressed that both countries share similar interests in varying regional as well as international matters.

The collaborative spotlight on Belt and Road Initiative as well as Prairie Road development initiative of Mongolia was given special significance. The countries also plan to strengthen cooperation at trade points, facilitating coal and other exports from Mongolia. Aspire Mining Ovoot Coking Coal Project is placed well with substantial resource and advancing plans to benefit from strengthening bilateral relations between Mongolia and China.

Infrastructural Focus of the Project 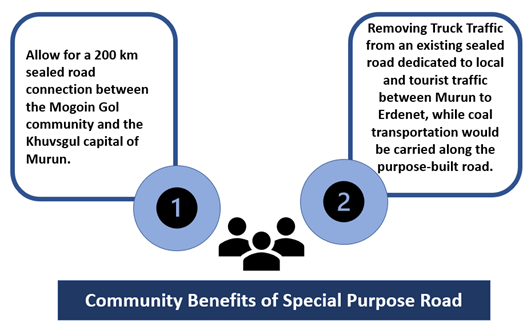 A Glimpse at Steady and Advancing Journey of Ovoot Project

The Company is completing several studies to assess the feasibility of a phased development plan, which aims at initially producing lower tonnages.

The Company’s undertakings were directed towards progressing for the approvals and ensure funding for the development of the OEDP.

Engagement with soums along the road path has continued to gain final Ministry approval for the alignment and completion of the definitive engineering study. Furthermore, eyeing for the completion of its OEDP Definitive Feasibility Study, productive engagement has been continued with local communities as well as with local Tsetserleg soum Government.

In the previous quarter, an operational plan along with financial model and budget was drafted. The drafted plans would be evaluated for further decisions concerning the advancement of the project.

[All currency is in AUD unless stated otherwise]