Adding another feather to its cap, Musgrave Minerals Limited (ASX: MGV) has announced Break of Day high-grade Mineral Resource Estimate on the Company’s flagship Cue Gold Project. Significantly, the total Indicated, and Inferred Mineral Resources for the Break of Day deposit is 797kt @ 10.2g/t Au for 262,000 ounces of contained gold.

It confirms Break of Day as one of the highest grades, undeveloped, near-surface gold resources in Australia. The improved confidence, along with the exceptionally high-grade nature of the near surface Indicated Resource, is a significant step towards future development. At the same time, it will also enhance the open pit development economics.

Musgrave’s Managing Director Rob Waugh stated that the high-grade Break of Day’s resource update is a significant milestone for the Company with the current focus on grade and margin. Furthermore, the Break of Day deposit boasts undeveloped, near-surface robust yellow metal resources near existing infrastructure, which are very rare in Australia.

Mr Waugh believed that growing resource base on the Company’s wholly owned Cue Project, consisting of Break of Day and Lena, is exceptional and holds significant value.

The latest update is increasing the contained resources and improving the overall grade of the Break of day deposit. Besides, it also delivers a significant uplift in the geological confidence through the refining of the geological model and growth in the Indicated Resource category. 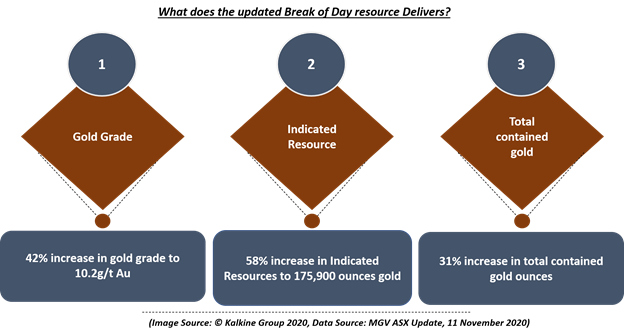 The Mineral Resource at Break of Day extends over a strike length of over 500m, with most of the individual gold lodes drill tested to 250m vertical depth. The mineralisation remains open down-dip in a number of areas where further exploration drilling would be necessary.

The exploration has indicated that there lies the potential for resource growth through further discoveries following recent results from the drilling undertaken south of Break of Day. The Mineral Resource at Break of Day is defined by 25 individual lodes with approximately 85% of the gold contained within five main lodes, including Starlight, Twilight, Velvet, White Light and Lode 13. 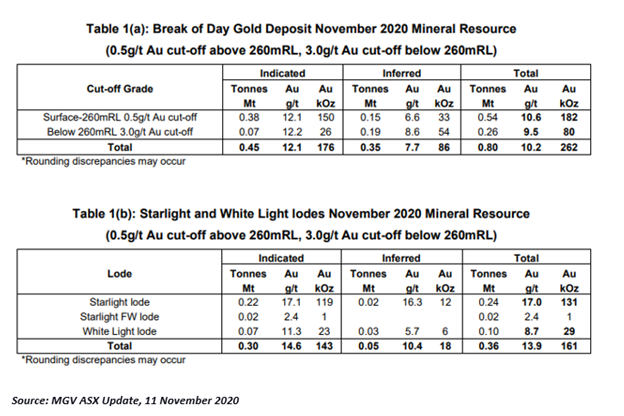 As stated by Mr Rob Waugh, the mineral resource update confirms Break of Day as a standout, high-grade and near-surface gold deposit that will significantly be “amenable to open-pit mining”.

The deposit is situated on a granted Mining Lease and exhibits excellent infrastructure within a favourable mining jurisdiction. Musgrave used high-grade top cuts in the resource, which impacted the bonanza grades near the surface at Starlight.

After the 2017 resource estimate, the Company undertook an additional 30,000m of drilling at Break of Day. Musgrave completed re-interpretation of the mineralised gold lodes following a detailed geological and structural review as well as the Starlight and White Light lodes discovery.

The new updated resource model is based on re-interpretation of the Twilight and Velvet lodes. It is confirmed from an increase in confidence by reducing the drill hole spacing and expanding resources in a more robust Indicated category.

The high-grade gold mineralisation occurs from only 2-3m below the surface. Meanwhile, amenability of a significant portion of the deposit will likely generate substantial margins.

The confidence in the new resource model has improved with significant infill and extensional drilling, which also led to a substantial uptick in grade and ounces in the near-surface component. 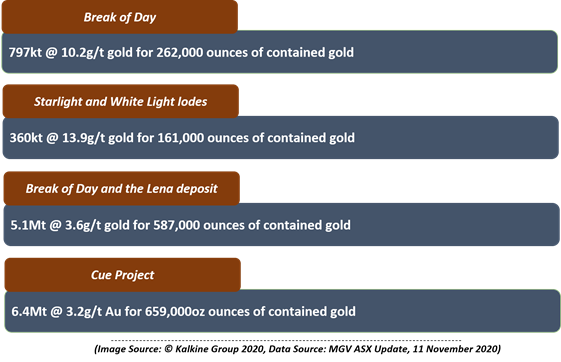 Musgrave is currently undertaking a regional drilling program aimed at testing Starlight analogues along trend. Significantly, several new mineralised, near-surface, high-grade gold zones have been identified in the program and include Target 2 and Target 9 (Leviticus).

The focus of the program is to define further high-grade, near-surface gold deposits for further growing the resource base.