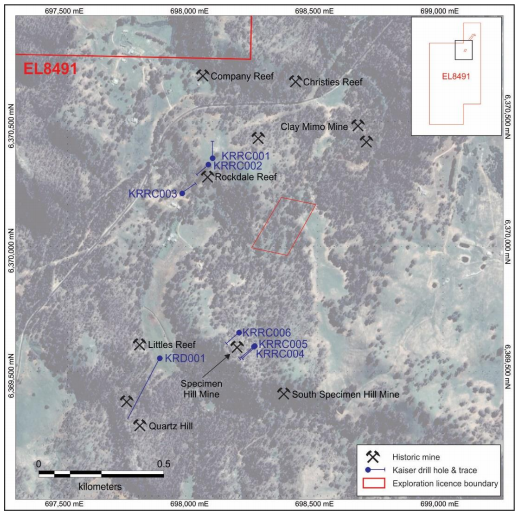 The drilling program included 6 RC drill holes for over 776 metres. Anomalous results of 0.53 g/t gold is returned by KRRC001, the 1st drill hole, over the 3-metre interval in a composite sample, 24 metres downhole. The intercept is planned to resample as single metre intercepts.

Drill holes KRRC002 and KRRC003 tested the North-South trending structure which was identified during the geophysical survey. The structure has been intercepted during the drilling campaign and resulted in anomalous grades of 0.25 g/t gold at the drill hole KRRC003 over a 3-metre interval in a composite sample, 97 metres downhole. The intercepts will be sampled again on metre long intervals. 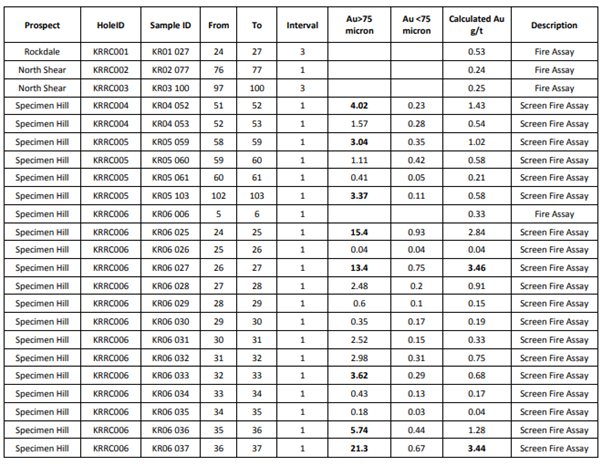 Additionally, 3 RC drillholes targeted the mineralisation beneath the Specimen Hill historical mining centre. Each of these 3 drill holes intersected mineralisation and the geological host has been mapped as brecciated porphyritic andesite. The lithology is interpreted as the prospective host for large scale gold mineralisation.

Coarse gold has been identified during the drilling program, which was assayed using the screen fire assay technique, returning assay with >75µm fraction and remainder of the pulverised sample The assay laboratory has presented the estimated head grade for the overall sample.

A deeper diamond drill hole is currently being drilled targeting the modelled intrusion beneath the Quartz Hill historic mine and has now reached a vertical depth of 540 metres.

The Stuart Town gold project is considered underexplored and has been subjected to minimal modern investigation ever since the commencement of mining in the 1850’s. The maiden drilling program provides significant geological information for the current exploration program. The information would be anticipated to assist the geological modelling and assist with identifying the host and the style of the mineralisation.

*All financial information pertains to Australian Currency unless stated otherwise.