The IOCG target is a part of the Company’s jointly held Elizabeth Creek Copper Project in South Australia. Coda Minerals (ASX:COD) is the project operator and holds a 70% interest, while Torrens holds the remaining 30%.

Earlier this week, the Company updated on a standout 43Mt maiden Cu-Co Mineral Resource Estimate at the Emmie Bluff copper-cobalt deposit within the project.

The project is unique, perhaps in the world, in hosting both shale-hosted copper-cobalt mineralisation and Iron Oxide Copper-Gold (IOCG) mineralisation, for which the Olympic Dam Copper Province is more famous.

The latest tranche of diamond drillhole assay results further confirms the presence of a high-grade bornite zone within the IOCG deposit. A peak grade of 9.48% Cu in one of the drillholes supports the exploration model adopted by the JV partners.

The assay results are from four drillholes including two parent holes and two wedge holes. The hole DD21EBD0003W2 (3W2) delivered the most significant results, encountering 68m of high-grade copper-gold mineralisation. 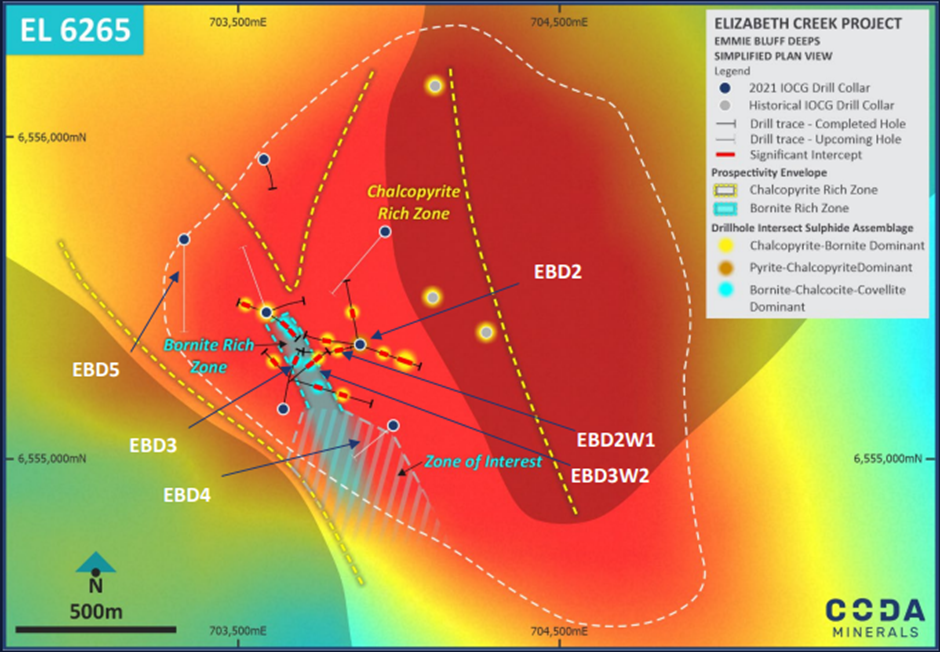 The hole 3W2 encountered a 26m zone of bornite mineralisation at a depth of 804m, and a 42m thick zone of chalcopyrite dominated lower lode at a depth of 911m. These results are from the section of the diamond core that was considered to be most prospective part of the hole, based on geologist’s visual estimations of copper grade. These sections were prioritised for processing and assaying for a quick turnaround in results.

The assay result from the hole 3W2 is the best drill intercept received from Emmie Bluff Deeps to date. The 68m high-grade Cu-Au mineralisation intersected in two intervals confirms the visual results that the partners shared in October 2021.

The full assay results from the four holes are shown in the below table: 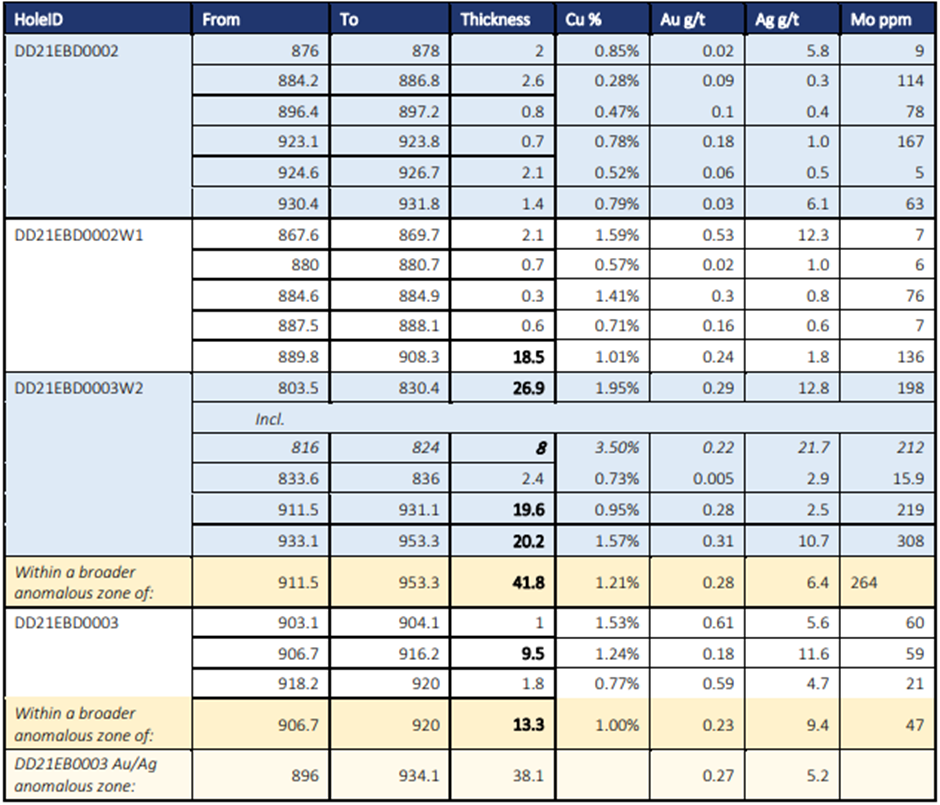 Assay results of drillhole 3W3B are also anticipated to deliver a similar encouraging intercept of bornite in the higher-grade upper lode. If so, this would establish the increasing trend of thickness within this high-grade zone towards the southeast. The visual intercept result has already suggesteded this potential.

At the project, drilling is underway in two drillholes, EBD4 and EBD5. Drillhole EBD4 is testing one of the most prospective areas to date on the project. The aim is to further delineate the bornite dominated mineralisation zone encountered in 18W2, 3W2 and 3W3B. The decision to drill wedge holes to EBD4 and EBD5 will be made after the results of the parent holes.

Driven by the encouraging outcomes, the JV partners are gearing up for follow up exploration activities as a top priority. The results have highlighted the potential for an enormous increase in lateral extent of IOCG mineralisation around drillhole EBD2.

The field team has been demobilised for the upcoming holidays, and work will recommence in the first week of January 2022.