Greenland Minerals Limited (ASX:GGG) is involved in the mineral exploration and project evaluation of the Kvanefjeld Rare Earth Project. The Project is underpinned by a JORC-code compliant resource of >1 billion tonnes, and an ore reserve estimate of 108 million tonnes to sustain an initial 37-year mine life. It offers a new, simpler path to rare earth production than traditional refractory sources.

Located near the southern tip of Greenland near existing infrastructure, Kvanefjeld has year-round direct shipping access to the project area. It is one of the world’s most important emerging rare earth project, well-positioned to see Greenland become a globally significant supplier of materials that are key to an energy efficient, and environmentally sustainable future. 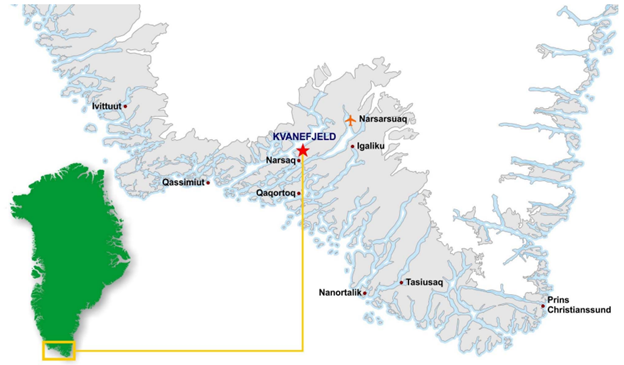 The Company has reported its progress for the half year ended 30 June 2021. Let us acquaint with the same and then understand the way forward-

The primary focus during the reporting period was on the public consultation and permitting for the Kvanefjeld Project.

The statutory public consultation of the Project’s Environmental Impact Assessment (EIA) and the Social Impact Assessment (SIA) was initiated on 18 December 2020 and was scheduled to run through to 13 September 2021. This marked an essential milestone in the Greenlandic Government's formal decision-making process in relation to the issuance of an exploitation license for the Project. 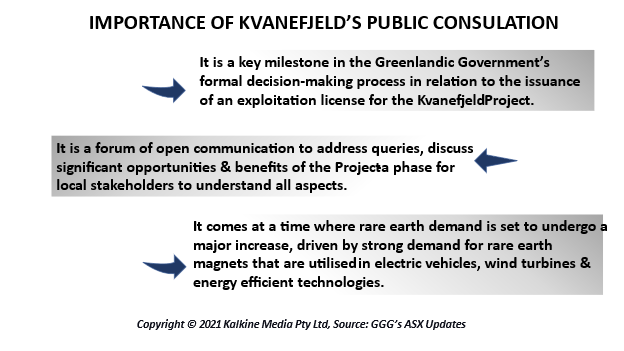 A twist in the statutory public consultation meetings?

A new coalition government made up of the Inuit Ataqatigiit (IA) and Naleraq parties formed in Greenland in April 2021. While the new Government opposed the development of the Project, it was part of the public consultation meetings in August.

Greenland Minerals was not part of the second round of community meetings because of changes in the format and conduct of the meetings. There was no formal obligation for the Company to participate in these meetings, that were scheduled primarily for politicians from the new Government to discuss the project with the various communities.

Additionally, the Government has put forward draft legislation for consultation to ban the exploration and exploitation of uranium, a naturally occurring radioactive element. However, the Project is likely to release tiny amounts of extra radioactivity to the environment.

Once the consultation period is over, Greenland Minerals and the Government need to respond to the various issues raised during the process. These responses will be collated in a document referred to as the White Paper.

The Company informed that-

Greenland Minerals has completed additional environmental baseline studies in the broader project area. This has been designed to help with stakeholder understanding of the Project and increases the understanding of chemical dispersion by natural processes.