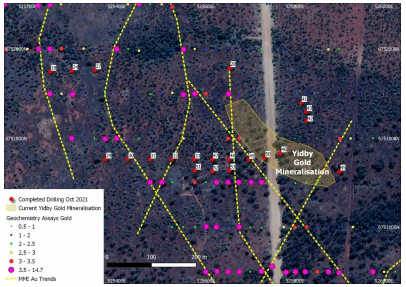 These holes tested the depth extensions along strike of the previously drilled hole, YBRC017, which recorded broad intercepts including 100m with 0.53g/t from 96m. The geological logging so far has identified 18m of quartz-sulphide alteration from 212 within YRBC041.

Samples have already been shared for analysis and the results could take up to 8 weeks due to high demand.

Previously, Surefire had announced that large anomalies were identified at Yidby after the August 2021 sampling program. The geochemical data has now been thoroughly interpreted to delineate anomalous trends. Among these, the coincident gold and copper trends, and the large banded-iron ridge with parallel quartz veins to the west are believed to be significant. 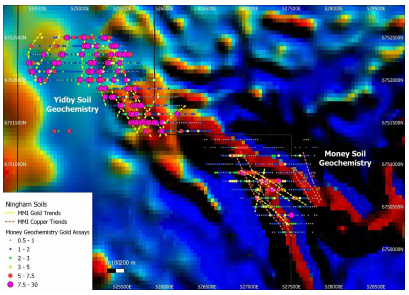 The mineralisation is interpreted to be not associated to the Yidby Road despot system which traverses across the northern contact of the Money MMI anomaly.

The latest “Money Anomaly” is an extensive northwest trending 1,000m x 250m area with MMI gold-in-soil anomalies. An array of parallel structure has been interpreted to be associated to copper and gold mineralisation but may be associated with a wide or flat dipping structure. The flora and fauna study at the Money MMI Geochem anomaly has also been concluded.