With this collaboration, Skin Elements is set to benefit from the broad market reach of West Coast Naturals with ~4.6 potential customers. Initially, the partnership will target three priority markets - Australia, Hong Kong, and Singapore.

Following the wide recognition of SE Formula range of organic health care and beauty products, West Coast Naturals approached SKN, which could potentially profit from the access to the e-commerce player’s target market.

Moreover, as part of the negotiation and due diligence process, SKN reviewed the proposed development program for the e-commerce platform of West Coast Naturals, including 3rd party information such as government databases.

SKN mentions that as West Coast Naturals has been established recently, it has not achieved sales through its e-commerce platform, which is currently under development.

While the collaboration opens new avenues for SKN, the Company has apprised its investors that it cannot guarantee improved sales via the distribution agreement.

The key terms of the agreement between Skin Elements and West Coast Naturals are: 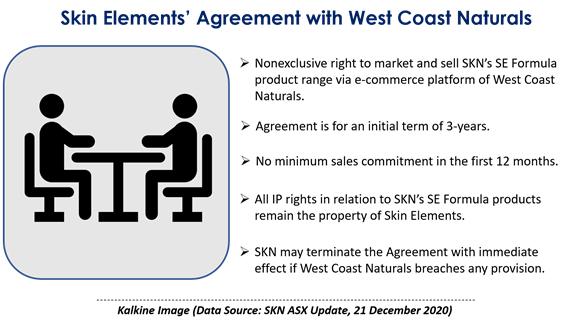 West Coast Naturals was founded in December 2020 by an experienced sales and marketing expert, Ms Amanda Strachan in Perth, WA. The business is the result of a five-year development program to develop an e-commerce platform to offer Australian natural health and beauty products directly to customers across the globe. The Company’s e-commerce platform has a special focus on the distribution of products to South East Asia. 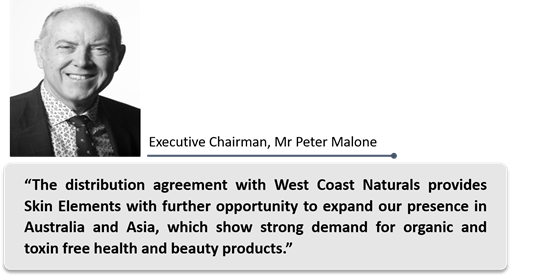 The collaboration with West Coast Naturals provides Skin Elements a wider reach as it can sell its Natural Skincare Product Range across the Australian and Asian markets. The robust demand for natural, organic health and beauty products in the Australasian region will act as an icing on the cake and is expected to benefit SKN further.