Delivering high-quality engineered solutions to multiple sectors, engineering & construction business Saunders International Limited (ASX:SND) has been actively adding on to the growth of industries across Australia.

Notwithstanding the challenging environment that the world is currently operating in, Saunders continues to win new projects across sectors.

Recently, it was awarded approximately AU$11 million worth of new infrastructure projects. 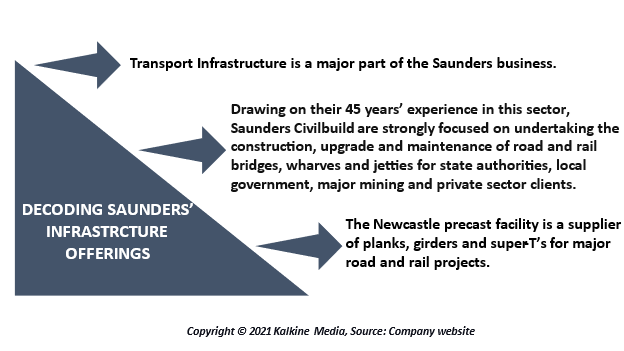 Firstly, the Company has been awarded the design and construction of six bridges across NSW’s three Local Government Authorities. Besides, it also bagged a rail overbridge project for John Holland CRN.

The second award is for a defence site in NSW - the manufacture of specialised infrastructure components, including 25 dock blocks. Besides, Saunders also was awarded with 6 Super Ts for a specialist private contractor.

Notably, these projects will contribute to Saunders’ revenue from Q4FY21 to Q3FY22.

The Company’s project wins demonstrate that it has continued to progress the Growth phase of its strategic plan. This prepares a strong backdrop for further growth across the year.

On this note, it should be noted that Saunders has reached the preferred contractor status on further infrastructure projects. These are valued at approximately AU$8 million. The final terms & conditions are under negotiation at present.

What Is Supporting Saunders’ Stance On Infrastructure?

The “Fixing the Country Bridges” program was released by the NSW Government at the end of 2020. It is an AU$500-million program, which aims to create a new legacy for Saunders’ local NSW road network. It also enables councils to replace more than four hundred timber bridges in poor condition. As the icing on the cake, the program connects regional and rural communities in a better way.

Besides, Saunders’ contribution to the successful delivery of the iconic Sydney Harbour Bridge project has also led to increased manufacturing opportunities. In this project, the timber rail deck was replaced with a concrete structure, manufactured at the Company’s Newcastle precast yard.

Saunders’ is witnessing a surge in new contracts across sectors. It will be interesting to watch more project wins as the Company remains committed to providing a range of consistent, inventive, and cost-effective solutions, with smooth project delivery to its diverse clientele.

MUST READ: Which Sectors Saunders International (ASX:SND) is Aiming for in 2021?