The exploration prospects of Renegade Exploration Limited (ASX:RNX) have further strengthened at its Yandal East Project with encouraging results from a sampling program.

During March 2021, the mineral exploration and development company concluded a rock chip and soil sampling program over the Andrews-Baxters Prospect at its Western Australian project.

The Yandal East Gold Project offers a significant opportunity for the Company as the Yandal Greenstone Belt is said to have produced more than 10Moz of gold.

PREVIOUS UPDATE: What is the latest at Renegade Exploration Limited (ASX:RNX)

Renegade Exploration has received all the results for the program, which has successfully identified anomalous copper, zinc, and barium in the rock chip samples.

The host rocks are metamorphosed acid to intermediate volcanic rocks, and the anomalous elements related to the previously identified bedrock TEM conductor are suggestive of the conductor being related to a Volcanic Hosted Massive Sulphide system.

Prospectivity of the Conductor Zone

The conductor zone at the Andrews-Baxters prospect was discovered during the ground geophysical survey, which was undertaken in February this year, followed by the rock chip and soil sampling program. The conductor is identified to be 600m long, plunges at 50º to the East and remains open at depth and on strike to the south.

The sampling program across the prospect continues to signify the potential for base metal prospectivity in a location, which has interestingly witnessed less or no contemporary exploration. Promising rock chip results of copper, zinc and barium, have been reported, including RC210305002 with 0.112% copper, 0.111% barium, 948ppm zinc.

As the soil sampling program only assayed for gold and reported low tenor results, RNX is now looking to assay the samples for base metals. The Company is in pursuit of a rig to target this project and other lately generated gold targets.

The region is recognised for base metal prospectivity with proximal volcanic-hosted massive sulphide hosted mines at Teutonic Bore. Additionally, the Earaheedy zinc-lead prospect sits north of the Yandal East Project. 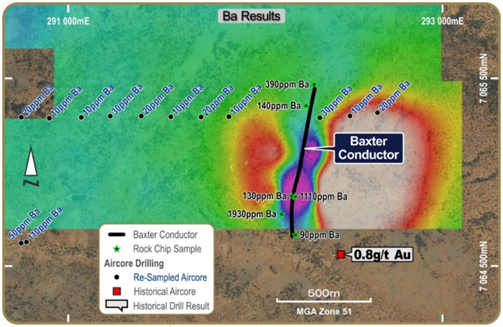 Previously, the Company also conducted a drill hole cuttings survey of historic holes in the area. These were successfully sampled for nickel and encouragingly, numerous historical holes adjacent to the prospect have been found to contain nickel assays >1000 ppm and correspond with magnetic highs.

No magnetic anomalies were discovered at the conductor zone identified by the latest ground TEM survey. However, the rock chip samples continue to improve and develop RNX’s geological model of Yandal Project’s base metal potential.

All in all, the recent rock chip sampling program is highly encouraging for the Company, and in conjunction with the Drone Magnetics, gravity survey and ground TEM survey, has delivered a further compelling target for the upcoming drill program.