Must Read: All that you need to know about Podium Minerals (ASX:POD) December quarter

The conventional Pb collection fire-assay method used by Podium allowed the detection and assessment of grades of platinum, palladium, and gold (3E PGM). These results were included in the estimation of Inferred Mineral Resources, containing 1,390,000 ounces of combined platinum, palladium, and gold along with base metal credits of 53,900 tonnes copper at the Parks Reef project.

The samples for re-assaying were selected from 5 drill holes at Parks Reef to test the prospect for rhodium and iridium, using the expensive nickel-sulphide collection fire assaying technique. The selected samples were collected from the mineralised intervals from 1 hole in the western sector and 4 holes in the eastern sector. So far, over 304 samples have been assayed for full suite of PGM elements from the Parks Reef project. 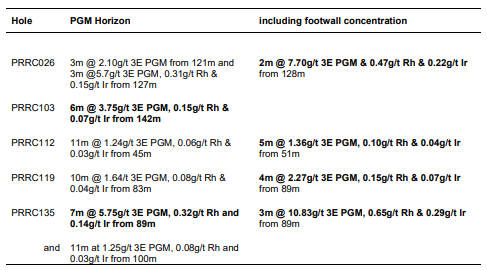 Assay results for 5E PGM plus Rhodium and Iridium at a cut-off grade of 1g/t 3E PGM and 0.05g/t Rh Source: POD Company Announcement 5 May 2021

The rhodium and iridium assays have been reported within the significant PGM intercepts at a cut-off grade of 1 g/t 3E PGM. Both rhodium and iridium have been considered as credit metals. The presence of multi-commodity mineralisation if payable, usually enhances the economics of the project and brings additional revenue stream for the mining project upon development.

Must Read: Podium Minerals’ high-grade PGM intersections up to 25.74 3E PGM at Parks Reef set the stage for resource upgrade

The rhodium and iridium concentrations in the lower section of the main PGM Horizon have been represented at a cut-off grade of 0.05 g/t Rhodium. Drilling is already underway to test the continuity of the high-grade mineralisation.

In the first week of May, Palladium surged to the record levels of over US$3,000 an ounce, registering an increase of over 21% since mid-March. The silvery-white metal has recorded higher demand in the recent months for catalytic converters and industrial applications amidst stringent pollution guidelines in Europe and China. 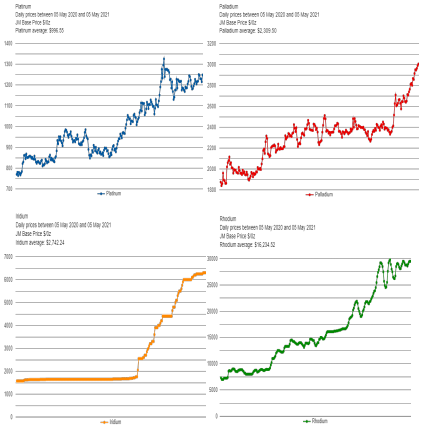 A similar rally has been seen in the prices of Platinum, Palladium, Iridium and Rhodium in the recent months with Rhodium the absolute standout performer. The strong price environment for these metals further enhances the economic potential of the Parks Reef project.