The White Heat Prospect (Target 2), located 300 metres south of Break of Day, exhibits analogous mineralisation orientation as that of the Starlight lode and is hosted within a basalt package considered similar to Starlight-hosting stratigraphy. The potential for recurrence of high-grade mineralisation intercepts as returned by the stunning Starlight prospects puts Musgrave exploration endeavours at a vantage point.

A Snapshot of Recent High-Grade Results at White Heat

Further RC drilling at White Heat prospect identified robust gold results over a strike extent of up to 100 metres with a steep westerly plunge. 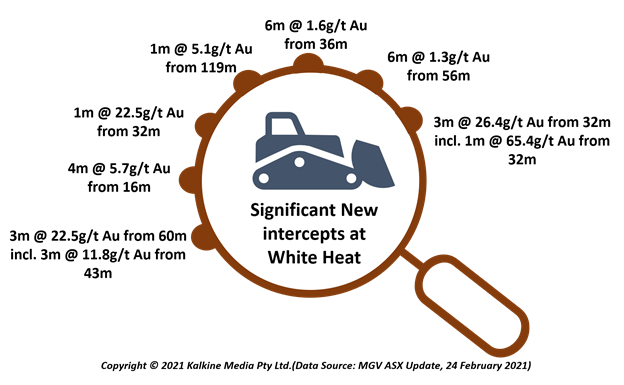 The Company has examined a combination of one-metre individual samples as well as six-metre composites from the RC holes as part of the current program.

The current RC drilling program is testing the targets, and assays are anticipated by mid-March.

Road Ahead for Musgrave’s Exploration Endeavours

Musgrave has successfully wrapped up its Phase 1 RC drilling at the White Heat target to a vertical depth of ~125 metres. Further assay results are anticipated in late March 2021.

Initial RC follow-up drilling has been completed at other regional targets including Target 5, 14 and 20. The drilling was focused on defining the basement source of gold anomalism at the targets, and results are anticipated in mid-March.

Musgrave has also kicked off an extensive regional aircore drilling program over existing targets with the aim to define the extent of gold anomalism.

Meanwhile, the pre-feasibility studies are in progress at Break of Day as well as Lena deposit.

The extensive regolith gold anomalies identified from the regional aircore drilling program on Lake Austin are being tested with follow-up diamond drilling commenced.