In an upbeat announcement, Musgrave Minerals Limited (ASX:MGV) has reported further high-grade reverse circulation (RC) gold assays from the White Heat and Numbers prospects at its 100% owned flagship Cue Gold project. The latest batch of assay results is an extension of robust regional drilling that has widened the resource potential of the project.

RC drilling undertaken at White Heat, 300 metres south of Break of Day, not only continues to confirm robust near-surface gold mineralisation but has also extended the mineralised high-grade shoot to 120 metres down plunge, where the mineralisation remains open. 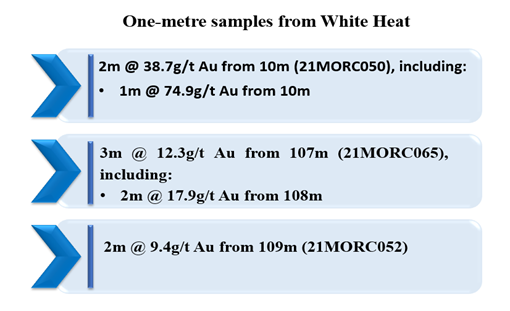 The strike extent of the high-grade shoot at White Heat is up to 80 metres in fresh rock and has currently only been drilled to a maximum ~120 metres depth.

The Company has also updated about the completion of further five RC drill holes at White Heat prospect. Drill holes are sited at approximately 40 metres intervals along 20 metres spaced traverse lines. Musgrave has received assays for all completed holes.

Numbers Prospect could be satellite pit

The Numbers prospect, situated around 3.5 kilometres south of Break of Day, hosts Inferred Resource of 278,000t @ 2.46g/t Au for 22,000oz gold. The Company foresees Numbers as a potential satellite pit, which would support a more extensive development at Break of Day/Lena.

The RC resource definition drill holes are spaced on an approximately 20m x 20m grid, with mineralisation from most drill holes consistent with the existing model. 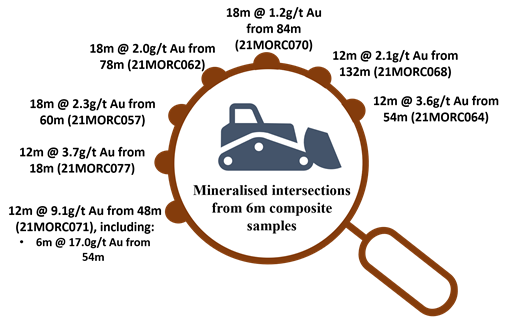 One-metre samples from anomalous gold composites have been submitted for individual analysis, with results expected in late June.

The Company anticipates receiving one-metre resamples from six-metre composite samples of ~40 regional aircore drill holes from Target 14 and Big Sky in June 2021. Meanwhile, Musgrave is progressing follow-up RC drilling at the new Big Sky target, aimed at defining the basement source. So far, 40 holes have been completed, with the first assay results expected in early June.

Follow-up RC drilling has been kicked off to define the basement source of gold anomalism at Target 14. The initial assays are anticipated in June 2021. The Company is making good progress on the pre-feasibility study at Break of Day and Lena, with additional diamond drilling for metallurgical testing in progress.

On Lake Austin (Evolution JV), the diamond drilling program consisting of seven holes has been completed to follow up the extensive regolith gold anomalies identified in the regional aircore drilling program. Results are due in June.