In late 2020, Musgrave completed 445 aircore holes over 25 targets, and composite assays have been received for all holes.

With several robust gold results, follow-up drilling has further extended near-surface mineralisation of the precious metal at Target 5. Following the significant update, MGV shares edged up by ~3%, trading at A$0.385 on 19 January 2021 (at 3:37 PM AEDT).

The regional drilling program has demonstrated to be extremely valuable to test targets derived from geological, geophysical, and geochemical data.

At Target 5, Musgrave undertook follow-up drilling which has confirmed as well as extended the gold anomalism along more than 120 metres strike. Early drilling interpreted two parallel zones of gold mineralisation, both open to the north as well as south along strike.

Several drill holes ended in mineralisation and thus the extent of the gold intersection is not fully defined. Musgrave will complete additional drilling as a priority.

The numerous end-of-hole intercepts and the level of anomalism is exceptionally encouraging.

Furthermore, neither any drilling is present for 0.5km southward of Target 5 to Target 20 nor to the north for more than 2.5km towards Target 14. 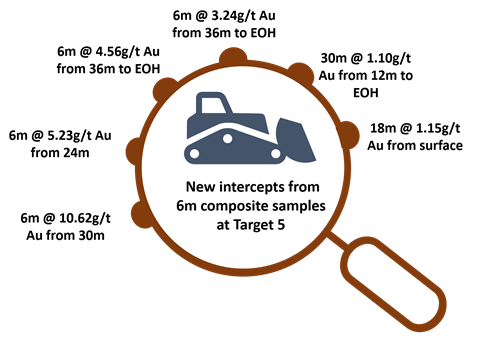 The Company has planned extensional follow-up aircore drilling in February. This will be subsequent to reverse circulation follow-up basement drilling below the current intercepts , which is scheduled to be undertaken in late January.

The regolith gold anomalism over 2.8km and open to the south has been confirmed from the follow-up drilling results at Target 14.

At target 20, the follow-up drilling has extended the near surface gold anomalism along 140 metres strike, where it remains open for 0.5 kilometres north and for 1.5 kilometres south.

Drilling at targets 4, 17, 18, 21 and 25 returned additional anomalous gold outcomes. Meanwhile, the extent of the gold anomalism would be defined through aircore drilling, which is slated to begin in February 2021.

Musgrave has wrapped up initial aircore follow-up drilling at high priority targets like White Heat and targets 21, 20, 17, 15, 14, 9 and 5. While the Company has received all-composite assays, around one-fifth of one-metre assays are still awaited. The Company has also kickstarted RC drilling at the White Heat target with the focus on follow-up of previous high-grade aircore results. 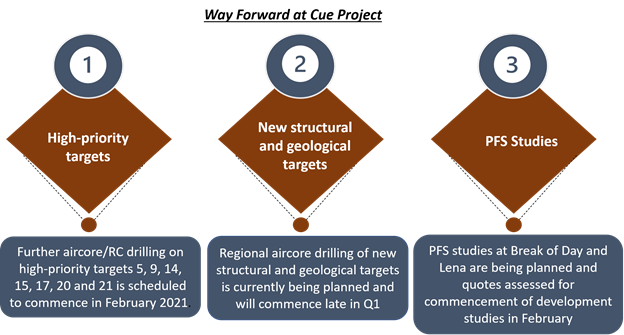