Mount Burgess Mining NL (ASX:MTB) recently presented at the African Mining Summit, discussing significant aspects and exploration progress at its Kihabe-Nxuu Polymetallic Zn/Pb/Ag/Cu/V/Ge project in Botswana. The Company is advancing its exploration initiatives well at the Kihabe-Nxuu deposit to the growing market potential for Zinc, Lead, Silver, Vanadium and Germanium.

RELATED ARTICLE: Which characteristics of Kihabe & Nxuu is Mount Burgess leveraging upon?

The project is situated in Prospecting Licence PL 43/2016, stretching over an area of 1,000 square kilometres. The prospecting licence covers the whole of that portion of a neo-proterozoic belt of SEDEX style mineralisation located on the Botswana side of the border.

In the African Mining Summit highlighted various principles, Mount Burgess recently outlined details and plans of the Nxuu and the Kihabe deposits.

A Snapshot of Nxuu Deposit

In the Nxuu deposit, Zn/Pb/Ag/V/Ge mineralisation occurs in a totally oxidized quartz wacke, hosted within a shallow, barren dolostone basin. The Company indicated that the average depth to the base of mineralisation, from 33 holes drilled to date, is only 40 metres while the maximum length is 59 metres.

On average, 54 per cent of all drill hole lengths drilled so far consists of recoverable mineralisation. Another 17.5% of the drill hole length contains Kalahari sand cover, while the remaining 28.5% are barren or lowgrade quartz wacke. 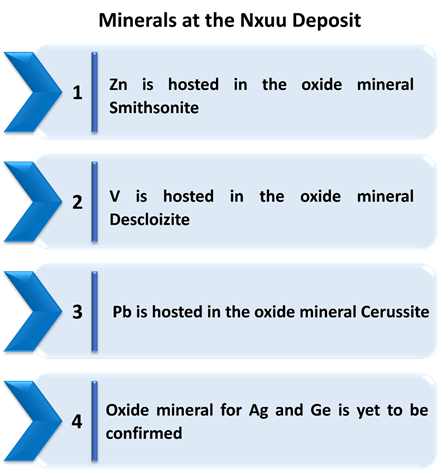 A further 2,200 metres of vertical HQ diamond core drilling is to commence soon. In the region, the average depth per is 45 metres. On completion, the drilling would enable estimation of a 2012 JORC Code compliant Indicated/Measured Resource.

From there, the Company would also conduct a final mineralogical/metallurgical test to enable the compilation of a Pre-feasibility study.

A mineralised strike length of 2.4 kilometres consisting of Zn/Pb/Ag/Cu/V/Ge mineralisation is covered by the polymetallic Kihabe Deposit. Up until now, a 14.5 million tonne resource has been estimated to contain a Zn/Pb/Ag, with a Zn equivalent grade of 2.84%. Moreover, this resource estimate does not contain any significant Cu/V2O5/Ge mineralisation zones, all of which could represent substantial credits.

The top 25% of the Kihabe Deposit is oxidized, hosting Zn, Pb and V2O5. On identifying Ag hosted minerals, further metallurgical test work will be undertaken. Cu and Ge are still subject to mineralogical and metallurgical recovery test work.

The bottom 75% of the Kihabe Deposit, down to 175m, is in sulphides and hosts Zn, Pb and Ag. Meanwhile, Cu is still subject to mineralogical and metallurgical test work.