Troy Resources Limited (ASX:TRY) has released the quarterly report for the period ending 30 September 2021. The untimely demise of Troy’s Managing Director and CEO, Mr Ken Nilsson, led to the delay in the release of the report. Mr Nilsson passed away on 20 September 2021 after failing to recover from a medical procedure.

Mr Richard Beazley, Non-Executive Director of Troy, was appointed as interim CEO and Managing Director to ensure the functionality of the Company.

Related read: What is Troy (ASX:TRY) doing to fast-tack development of Smarts Underground?

As informed during the June quarter of 2021, mining activities were suspended at the Karouni Project. The decision to halt the mining activities was taken due to the lower grade of stockpiles left at the Goldstar, Hicks and Smarts deposits on the project.

As mining operations ceased on the project, Karouni Mill was rendered for care and maintenance in mid-July 2021. Gold production from the remaining stockpiles at the Goldstar pit, during the reporting period, stood at 659 ounces.

The revenue generated during the September quarter was US$2.4 million from the sale of 1,319 ounces of gold.

Operational highlights of the quarter 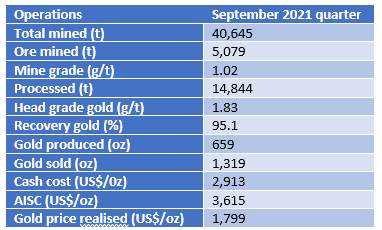 The September quarter saw Troy mine a total of 40,645 tonnes of material, of which 9,150 tonnes were mined from Goldstar, while the rest came from the Smarts deposit.

During the quarter, the Company commenced the process to liquidate some of its reagent inventory. To cut the costs, Troy shut down the power station and deployed portable generators for providing minimum electrical requirements.

Troy also demobilised the Ohio Creek Camp during the quarter and returned the accommodation blocks and equipment to the Karouni site.

Also, the Company terminated the equipment maintenance and repair contract with Farm Supply in early July 2021.

With the key mines Goldstar, Hicks and Smarts on the Karouni project depleted of high-grade ore, Troy concentrated its efforts on the development of the Smarts Underground deposit.

During the September quarter, activities were concentrated on completing the Pre-Feasibility Study on the deposit. Troy engaged Auralia Mining Consulting to calculate the maiden Ore Reserve, which was estimated at around 89,000 ounces of gold.

Auralia, in its report, highlighted that the deposit is economically viable based on its evaluation. The PFS report underpinned that Troy would require to spend US$3.7 to reach the upper stoping blocks from the start of the development mining. Another US$2-4 million would be spent on the construction of the portal, and initial construction works on the deposit.

Related read: Looking back at 2021: How was the year for Troy Resources (ASX:TRY)?

Exploration activities on the project

During the quarter, Troy drilled 49 RC and three diamond holes on its brownfield prospect Gem Creek. The drilling operation in the NW area of the prospect was designed to test the previously received intercept of 17m @ 4.74g/t of Au and test the contact with the Gem Stock Granite in the NW area. 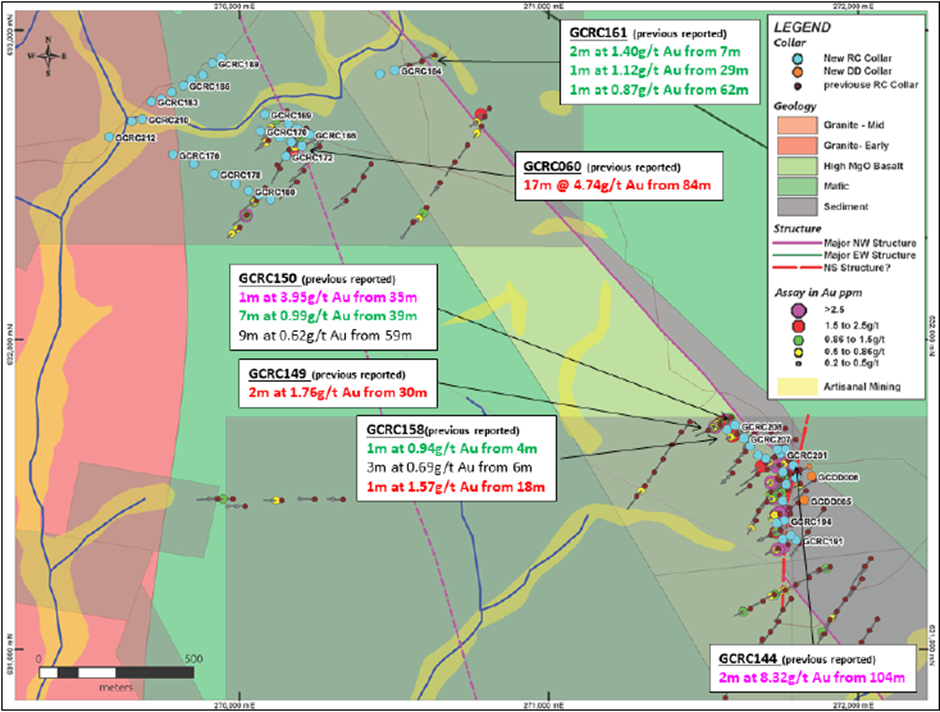 Additional RC and diamond holes were also drilled in the central block of the prospect. Troy reported that the assay results of the drilling campaign are still pending.

The company reported no exploration activities on its greenfield prospect during the reporting period.

Troy entered into an earn-in agreement with Barrick Gold for undertaking exploration activities over its southern land holdings along the Makaba-Kuribrong Shear Zone. The exploration tenements include Potaro target, Kuribrong, Mirror and Mirror SE. 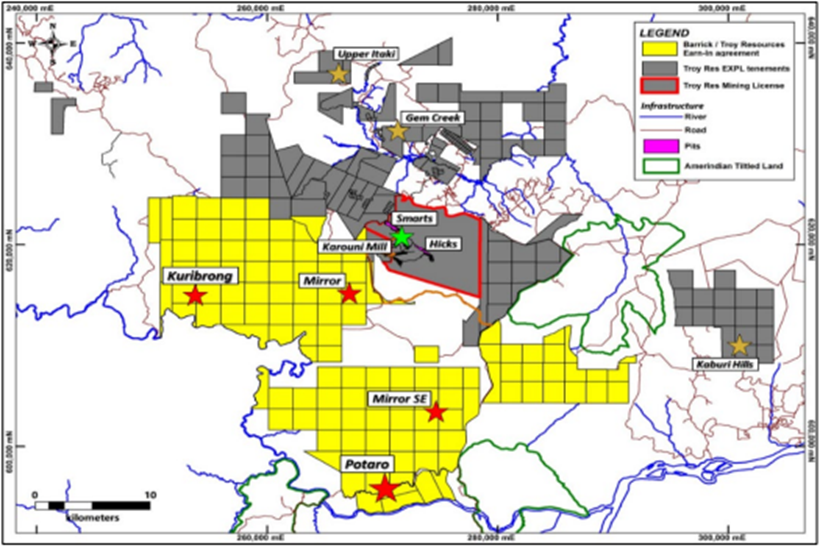 The tenements marked in yellow are part of the Earn-in Agreement (Image source: Company update, 24 January 2022)

Under the terms of the agreement, Barrick owns exclusive rights to earn up to 51% undivided interest in the exploration tenements. Barrick will fund the exploration expenditures and undertake the Pre-Feasibility Study of the tenement solely.

Barrick has already commenced exploration activities on the farmed-in tenements.

On 5 January 2022, Troy announced a major fundraising scheme to advance the Karouni Project. The step would lead to a recapitalisation of the Company. The move will also lead to the conversion of debt of the Company into equity and share issue for funds through placements and right issue.

The plan for recapitalisation will proceed further once approval from its shareholders is received.

Major highlights of the aforesaid fundraising scheme include: 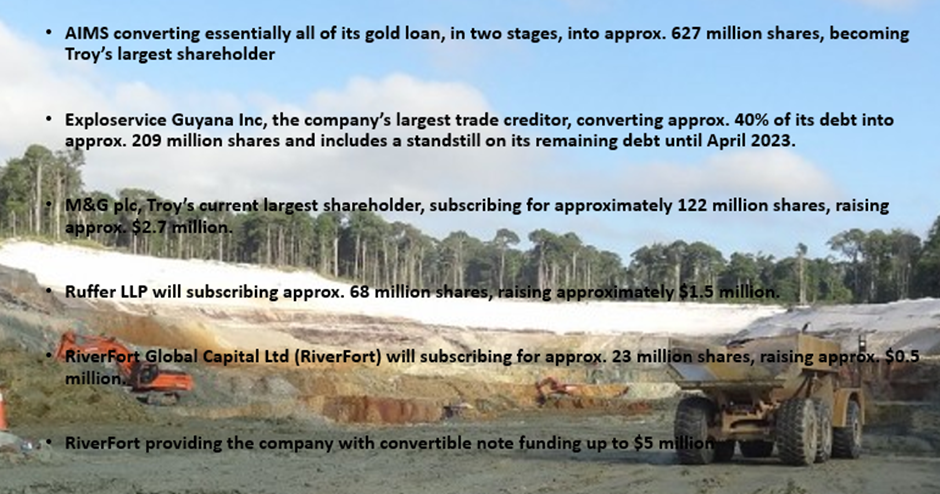 The transaction under the recapitalisation scheme will help Troy to raise AU$7.2 million in cash and would convert AU$18.7 million of debt to equity. Troy is hopeful that after the completion of the funding activities, Troy will be in a strong financial position to carry out its exploration and development activities on the project.