A Snapshot of the Drilling Program

Horizon’s highly effective 2017 drilling campaigns at Peyes Farm delivered a Mineral Resource Estimate of 0.53Mt grading 1.70g/t Au for 28.86koz at a 1g/t Au lower cut-off grade. Ever since, the 2020 drilling is the earliest program undertaken at the project.

A total of 49 RC and three diamond holes were drilled as a part of the program over an advance of 3,808 metres to a maximum depth of 132 metres.

The objectives of 2020 drilling at Peyes Farm included:

Results from the Program

The recent gold rally and success of the nearby Teal gold mine where pit produced 229,000t @ 3.2g/t Au for 21,836 oz have together been the driving force for the 2020 drilling program at the Peyes Farm. The program was intended to amplify the open pittable tonnes and grade from the oxide as well as transitional ore zones of the Peyes gold Farm.

Preliminary test work indicates that the metallurgy of the Peyes Farm is like that of the Teal deposit, mined to a vertical depth of 65 metres with outstanding recoveries in both the transition (90%) and oxide (94%) ore zones.

Variations in the weathering depth and the fresh rock boundary at the project were mapped more precisely with the latest drilling allowing the supergene ore assessment for conventional milling as well as treatment options which would be reviewed on the primary sulphide mineralisation. 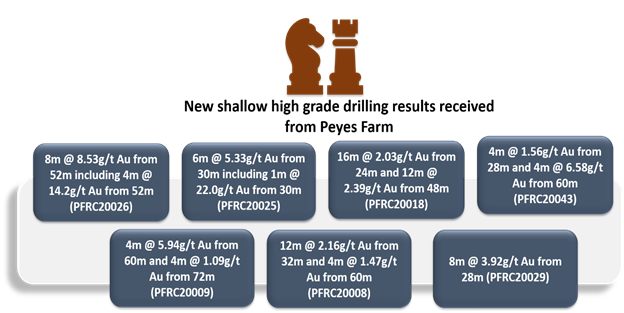 In Conjunction with the RC drilling, three diamond holes were also drilled to cater for metallurgical and geotechnical purposes and are in progress as part of mine optimisation, design and maiden Ore Reserve generation.

Excellent width and grades were obtained from the 2020 drilling program extending mineralisation to the north, with the strike length increasing to over 500 metres. Mineralisation remains open to the south and north within the enrichment zone of supergene mineralsation.

The assays from the latest drilling will underpin the compilation of an updated MRE anticipated for release in June Quarter this year. As part of the organic growth plan, Horizon has proposed further extensional drilling at Peyes Farm later in 2021. 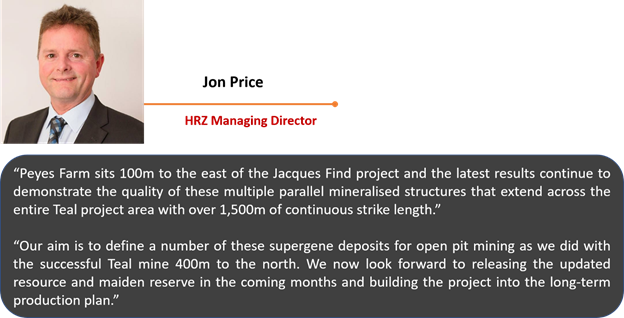