Horizon Minerals Limited (ASX: HRZ) is ticking all the boxes to become Western Australia’s next standalone gold producer. In line with its current objectives, the Company unveiled another set of high-grade gold results at its 100% owned Binduli project area, setting the stage to organically grow the project pipeline.

Notably, Binduli is one of the six core development projects complementing the Boorara-based standalone processing mill and would expedite Horizon’s journey to kick off gold production.

The drilling was undertaken as a part of the extensive CY21 program extending to 50K metres to test high priority targets to define resource and add new discoveries across the Company’s 1,100 square kilometres portfolio.

A Snapshot of Drilling program at Binduli

The Company completed 47 reverse circulation drill holes at Binduli for a total advance of 4,713 metres to a 200-metre maximum depth. The drilling was undertaken as a two-part program.

Results from drilling at Honeyeater prospect

Infill and extension drilling undertaken at the Coote prospect, sitting 500-metres west of Crake deposit (74,000oz) has extended the strike length to 400 metres. The latest results confirm the previous ones for including in the new resource model. 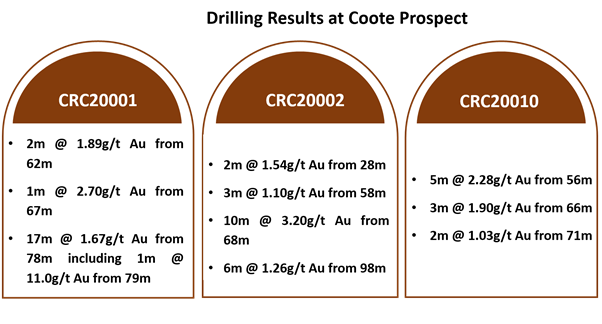 Road Ahead for exploration at Binduli Area

Horizon has identified a number of priority targets at Binduli, with further drilling at Honeyeater, Kestrel and its surroundings scheduled during 2021.

Drilling operations are planned to recommence later in June 2021 with up to 4 rigs operating round the clock through until the December-end. The Company also intends to conduct sterilisation drilling at Crake while the step out resource drilling would be undertaken to the north and west of Coote