Eclipse Metals Ltd (ASX: EPM) shared the update that the company had received the confirmation of a four-year extension to the Ivittuut Project mineral licence from the Government of Greenland.

The Ivittuut Project exploration licence MEL2007-45 has now been extended to 31 December 2024 with drastically lower minimum expenditure commitments for the first year. The following changes have been subsequent to the signing of addendum No. 6 to the licence document enforcing the updated conditions.

This marks the registration and transfer of the Ivittuut Project Licence for the next four years to Eclipse Metals.

Earlier this month, Ms Nathanielsen had said that mineral resources were extremely significant for the new government to diversify the economy to benefit all. She had commented -

“Mining remains an industry that the new government intends to develop and prioritise in the future – both for international companies as well as local entrepreneurs.”

Last month, the Inuit Ataqatigiit (IA) Party and the Naleraq party had formed a coalition government in the country. The new government is perceived to be very supportive of all types of mining activities, except for Uranium.

Ivittuut project – An ace in the making

The Ivittuut project includes the historical Ivittuut cryolite mine, undeveloped mineral resources, which also includes a large REE-bearing carbonatite deposit. The world’s only commercial natural cryolite mine has produced over 3.8 million tonnes of high-grade cryolite between 1855 and 1985. 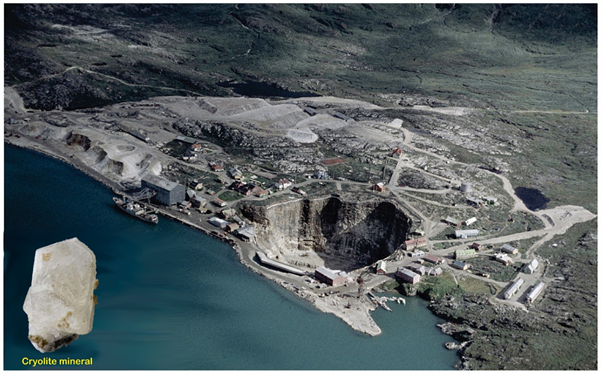 Ivittuut cryolite mine in 1960 and the Cryolite mineral Source: Eclipse Metals Website

The Ivittuut project includes the historical cryolite mine with substantial undeveloped resources and a potentially large REE mineralisation within carbonatite deposit. Eclipse plans to proceed with JORC code-compliant mineral resource estimation at the Ivittuut project.

All financial information pertains to the Australian dollar unless stated otherwise.