Eclipse Metals Ltd (ASX: EPM) announced the receipt of the Greenland Government’s approval for an initial fieldwork exploration programme at the Ivittuut Project. EPM, which had acquired the Ivittuut project in January 2021 and later in May 2021, announced the approval for the initial fieldwork programme on exploration licence MEL2007-45, Ivittuut.

The approval for the exploration programme, set to commence on 1 August 2021, has been granted, subsequent to the receipt of a formal advisory from the Greenland Mineral Licence and Safety Authority. The approval enables Eclipse to assess the access, ground conditions, and confirm the geological features at Ivittuut project. 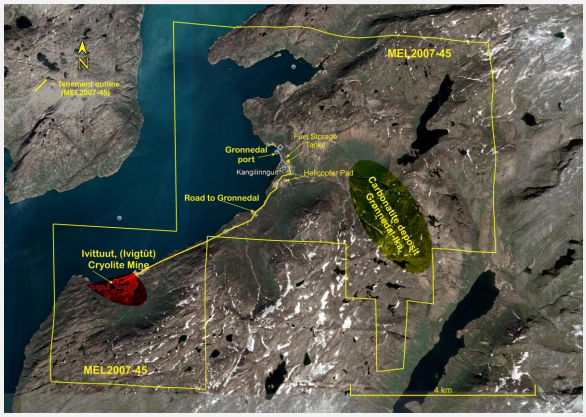 EPM owns the Ivittuut project in Greenland, which is the largest and only cryolite mine globally. In the past 120 years, over 3.8 million tonnes of Cryolite, a rare mineral used for aluminium production, has been mined at the project. Eclipse has already delineated high-grade cryolite-fluorite zones beneath and within the Ivittuut pit using 3D modelling.

The Grønnedal-lka prospect is 10km from the Ivittuut mine and contains carbonate rock and rare earth elements (REE) mineralisation. The carbonate rocks are typically used to neutralise acid mine and process water, and could be shipped by Eclipse from the existing Grønnedal port in the vicinity.

Mr Carl Popal, Executive Chairman of Eclipse Metals, said: “Approval from the Greenland Government is an important step and allows us to move ahead with our plans at Ivittuut, which once hosted the world’s largest known mineble resource of naturally occurring cryolite as well as REE-bearing minerals and a nearby REEbearing carbonatite formation.”

The Way Forward and Next Steps at Ivittuut

EPM has approved the programme of work at Ivittuut, which will include field assessment and general inspection, along with familiarisation by the new field team, sampling of the existing mullock heaps and sampling of geological bulk intrusions.

The appraisal program will open the path for subsequent testworks to assist the calculation of the JORC-compliant mineral resource estimates and further with the feasibility of the project. All in all, the maiden sampling program will include collection of samples from the Ivittuut mine tailings and low-grade waste dumps and the Gronnedal-Ika carbonatite.

Must Read: Will Eclipse Metals Seize the Moment as Uranium Demand Heats Up?