Shares of Eclipse Metals Limited (ASX:EPM) surged 3.85% to AU$0.027 following the announcement of outcomes of the new 3D modelling of airborne magnetic data across the Grønnedal-Ika carbonatite-syenite complex at the Ivittuut multi-commodity project (MEL2007/45).

The Grønnedal-Ika complex is among larger intrusions within the Gardar Province in South Greenland. The igneous complex at Grønnedal-Ika stretches over an 8km by 3km area, consisting primarily of layered nepheline syenites, which had been intruded by a porphyritic syenite and a carbonatite plug. The carbonatite consists of varying amounts of calcite, siderite and magnetite.

Siderite’s concentration increases towards the centre of the carbonatite plug. Also, magnetites occur in large concentrations at the location where mafic dyke cut the siderite-rich section of the carbonatite. The Geological Survey of Denmark and Greenland (GEUS) recognises the Grønnedal-Ika complex among the prime targets for REE mineralisation in Greenland. 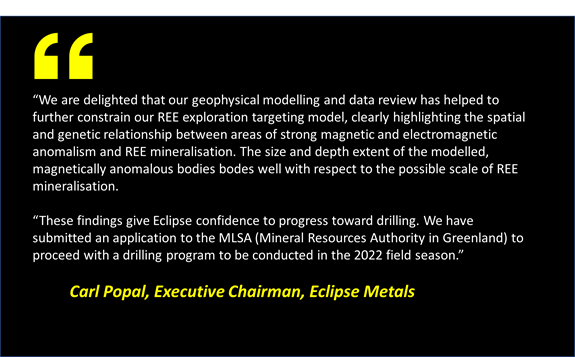 Eclipse’s 3D modelling of airborne magnetic data over the Grønnedal-Ika complex, one of Greenland’s prime REE targets, provided new insights into the subsurface distribution of magnetic bedrock and the possible architecture of this composite and structurally dismembered intrusive complex. 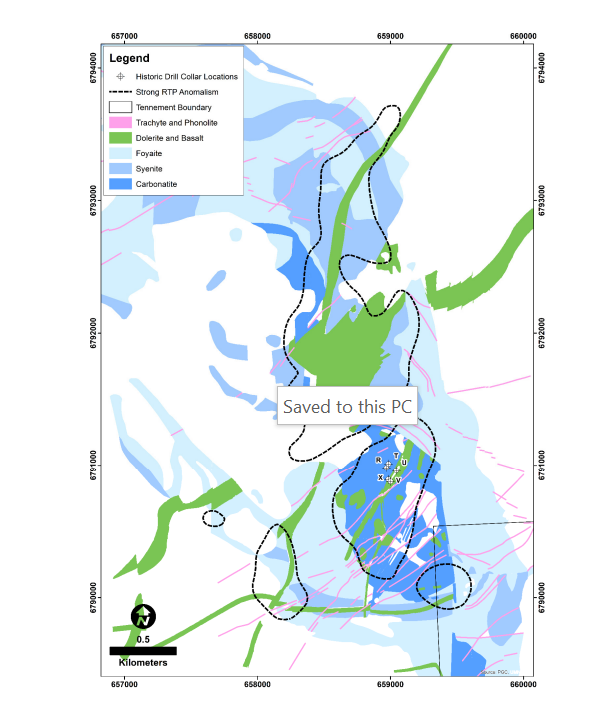 At the Grønnedal-Ika complex, igneous rocks mapped at the surface correlate with the already-distinct magnetic anomalies delineated during mapping. The strongest anomalism recorded in the southern central Grønnedal-Ika complex is coincident with the area from where grab samples of magnetite-bearing carbonatite and carbonatite breccia returned total REE (TREE) grades up to 34,468 ppm. 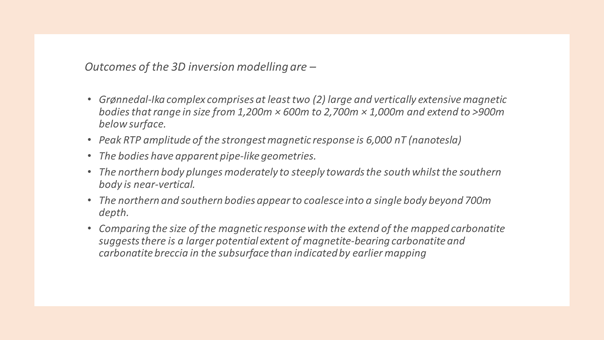 In 2021, a reconnaissance exploration by Eclipse Metals had recorded a strong correlation between REE mineralisation, with grades up to ~3.45% TREE, and the domains of the strongest magnetic anomalies.

Magnetic anomalism was known to be caused by magnetite-bearing carbonatite that was explored in the mid-1900s for its magnetite iron and niobium. Drilling activities were restricted to 6 holes with a downhole length of 750m.

The magnetite is mapped in the EM survey data. On comparison, the size of the magnetic response with the extent of the mapped carbonatite, an extensive potential of carbonatite is indicated.

Fathom Geophysics has also concluded a cursory review of the EM data. The review included the digitisation of EM bedrock conductors, which were recorded by the survey contractor at the time of data acquisition.

The latest outcomes provide Eclipse with a new REE targeting model and define targets for follow-up exploration. Eclipse has applied to Mineral Resources Authority to undertake a drilling program at Grønnedal-Ika in 2022. Subsequent steps are -