Corazon Mining Limited (ASX: CZN) announced the preliminary outcomes of the Phase One of its 2021 drilling program at the Lynn Lake Ni-Cu-Co Project in Manitoba province of Canada. 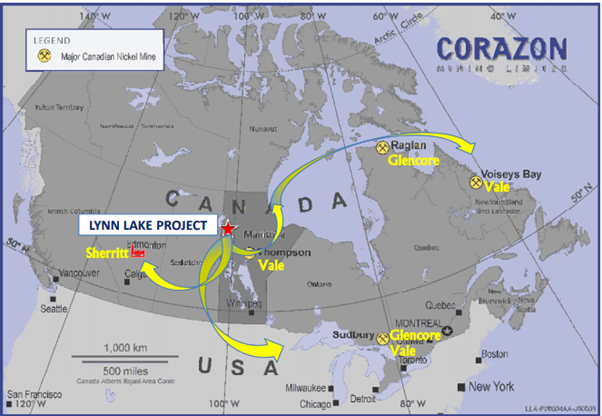 Corazon has completed drilling at three holes for a total of 1,482m during the current phase, leading to the successful first-pass testing of new target areas west of the Fraser Lake Complex (FLC). The drilling campaign confirmed the effectiveness of the MobileMT survey to delineate areas with potential for magmatic nickel copper cobalt sulphides at the Lynn Lake project. The drill holes have recorded promising intersections of favourable host rocks and showcases potential for magmatic sulphide mineralisation.

With the completion of drilling, Corazon is undertaking a DHEM survey on the drill holes of the latest and previous phases of drilling. DHEM survey will precisely define conductive bodies in close proximity to drill holes within larger sections of anomalism as defined by the previous aerial surveys.

The DHEM survey has been completed at five holes and has identified 10 new conductors, which may represent potential sulphide mineralisation. The anomalies have been identified as the priority targets for the successive drilling programs and bolsters the potential for an extensive conductive trend, west of FLC as identified by MobileMT survey.

The analysis of the DHEM survey data targeted on the delineation of responses is indicating large magmatic sulphide bodies. Currently, the DHEM program targets the holes drilled during the previous phase of drilling programs at Lynn Lake. The greater conductive area and the DHEM plates will be used to delineate the drill targets for successive exploration programs.

Once the DHEM program is completed, Corazon will plan the next phase of drilling program for which the details will be released in due course.

The current drilling program is the first test on the conductive trends identified by the aerial MobileMT geophysical survey system. Further, following the drilling, the holes have been probed using down-hole electromagnetic geophysical tools (DHEM) to define the location and size of the conductors precisely.

The effectiveness of DHEM in Hole #24 promoted the testing of other holes, which led to the identification of conductors of size similar to the high-grade deposits at the Lynn Lake Mining Centre.

Hole #24 – The drill hole was the first pass test of the MobileMT conductive trend. Multiple broad intersections of favourable gabbroic rocks with potential of magmatic sulphides were recorded.

Further, a small zone with strong sulphide mineralisation did not generate any in-hole conductance from DHEM and is understood to be caused due to the remobilisation of sulphide along shearing/faulting.

The sulphide mineralisation is related to the pipe-like/fault-controlled conductive trends. In fact, the conductor 24D with a size of 96 by 56 metres supports the MobileMT anomalies and offers a definitive drill target.

Hole #26 - The hole trended off target on top of the interpreted conductor. The hole was drilled to a depth of 440m. The DHEM of the hole did not find any conductors. Since, the hole deviated from target, the area needs to be properly tested and follow-up work is needed.

Hole #29 - The hole tested the South Pipe conductor, which is located 2 km south of the drill holes 24 and 26.

However, the drilling remained mostly inconclusive, Corazon believes that the South Pipe area is significantly prospective and additional work is needed to advance on the target. The South Pipe’s target model is EL Deposit, where high-grade nickel-copper-cobalt sulphide breccia were intersected at depth despite not being detected by DHEM.

The hole was drilled to a depth of 557m against the planned 720m and the DHEM was completed. The hole intersected tectonic and hydrothermal breccias within the rock formations with some potential agglomerations of interpreted magmatic or remobilised sulphides. The DHEM did not identify any off-hole conductors. Further, a magnetic piped intrusive body was identified. Additional field exploration are under consideration to define the South Pipe Conductor drill target.

Hole #23 – This hole was drilled prior to the MobileMT survey and had intersected potential altered gabbro and prospective magmatic sulphides with up to 10% content.

The larger of the two conductors identified is 84m in strike and extends to a depth of at least 287m. These conductors strike along a high-priority MobileMT target, which is yet to be tested.

Hole #18 – The hole was drilled in 2018. The DHEM on the hole delineated three off-hole and one in-hole conductors.

The in-hole conductor (18B) is small and holds only low sulphide content (3-5%) with a grade of ~0.2% Ni and 0.13% Cu. The Conductors 18A and 18C corresponds to good magmatic nickel-copper sulfide targets. The DHEM in the area was negatively impacted by a strong, conductive anomaly 18D.

Also Read: Corazon Mining (ASX:CZN) preps up for the next phase of drill at Lynn Lake