Corazon has recently acquired the new prospective ground that hosts the South Pipe target. Corazon has already identified South pipe as its highest-priority drilling target and was delineated by the recently concluded aerial MobileMT geophysical survey at Lynn Lake project.

Corazon is also preparing to conduct downhole electromagnetic geophysical surveys (EM) at all the drill holes tested during the campaign. The EM survey aims to further refine the drilling targets to be followed up. The 1,600m drilling program has been testing numerous targets, including the recently identified geophysical conductor.

The vertical pipe-like South Pipe conductor is characteristically different from other geophysical conductors that have been drill tested west of the main Fraser Lake Complex (FLC) and are interpreted to be dominated by lateral or horizontal intrusive magma flow. The vertical pipe-like structures hold strong geological similarities to the Lynn Lake Mining Centre, 9 km to the northeast. 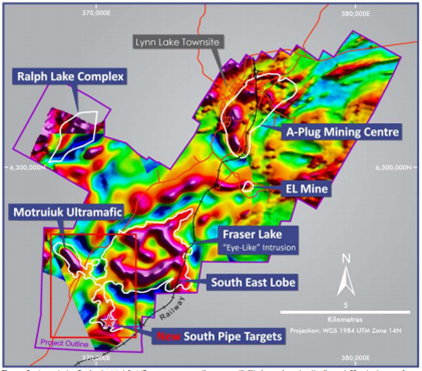 The southern body is conductive from over 100m to at least 850m beneath the surface and holds geophysical characteristics that are analogous to the massive sulphide breccias at the high-grade EL deposit. The historical EL mine produced over 1.9 million tonnes of ores with a grade of 2.4% nickel and 1.15% copper, 250m beneath the surface.

The downhole EM contractors have already begun the work at the project site. The geophysical and drilling program results will be released in due course and may include visual evidence of substantial sulphide mineralisation.