Besides assessing the effectiveness of the new AC pellet technology in killing red algal blooms, the tests were also designed to remove toxins without causing any long-term harm to the ecosystem.

As the Florida red tide algal blooms are known to cause severe environmental, economic, and public health issues, the Government is offering support to fund environmentally friendly treatments.

A snapshot of test results

The tests, which were conducted under lab conditions, have demonstrated that the Company’s Carbonxt Novel algaecide/activated carbon composites could kill 100% of algae in less than two hours when administered at a dosage level of 0.5g/L.

What’s more, a further variation of this AC pellet formulation was combined with a different algaecide, which also demonstrated significant promise in achieving a near 100% elimination at a much lower dosage rate of 0.1g/L. 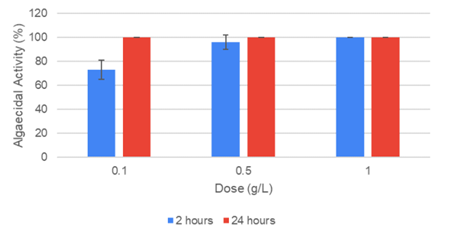 The tests that received a US$0.1 million government grant were conducted in collaboration with the world-renowned Mote Marine Laboratory to support the development of an AC mitigation technology for use throughout Florida’s waterways.

Carbonxt has indicated that the ongoing support from the Mote Marine Laboratory and the Florida Fish and Wildlife Conservation Commission is a substantial endorsement of the AC pellet technology. Joint efforts are underway, with a planned scale-up of field testing to take place.

While the first phase would determine the most effective delivery system in large-scale aquariums, a full-scale test would be carried out in an estuary during the final phase to determine the effectiveness of the technology in eliminating red tide algal blooms in large-scale ocean environments.

According to the University of Florida economists, the 2018 red tide bloom caused a revenue loss of US$184 million.

Moreover, a range of rising health issues such as respiratory illnesses (54%), gastrointestinal illnesses (40%) and increased diagnoses of pneumonia (19%) caused due to red tide events underlines a damaging effect on human health.

The research highlighted an average of US$22 million in medical expenses and lost income during red tide events.

In what further highlights Carbonxt’s critical role, US National TV (CNBC) recently featured the Company’s success in addressing major environmental concerns of airborne emissions and water contamination in the documentary series ‘Advancements’ with Ted Danson on the 11th of September 2021.