Recently, the company released its activity report for the quarter period ending on 30 June 2021, outlining the major milestones achieved by Arcadia during the period. The quarter saw culmination of milestones related to the ASX listing, capital raising and acquisition of the Namibian projects.

IPO places AM7 to unlock true potential across portfolio projects

Arcadia management is not only focused on the battery metals projects in Namibia but it is also pursuing substantial gold exploration potential at the Karibib project. On 25 June 2021, Arcadia listed on the ASX after concluding an oversubscribed IPO, issuing 32,000,000 CHESS Depositary Interest (CDIs) under the public offer at an issue price of AU$0.20 a unit.

The AU$6.4-million funds raised will be utilised to fund aggressive exploration programs across its projects. During the June quarter, a total of AU$155,000 were spent towards the exploration and development activities. The IPO proceeds will allow Arcadia to unlock the full value of battery metals and gold projects.

On 17 June 2021, a week before the listing on the ASX, the company acquired a suite of mineral’s projects –

Upon the completion of the acquisition of these projects, a total of 45,000,000 CDIs and 8,550,000 performance shares were issued to its vendors.

Swanson Project: An Ace in the making

The Swanson Project stretches over 19.4 km2 area on the exclusive prospecting licence 5047, located 100 km south of Karasburg and 15 kms north of the Orange River. The project hosts numerous well-mineralised pegmatites, which are mainly found in the Tantalite Valley Shear belt. The pegmatite strikes northeast – southwest and is a few cm to 10m thick.

The pegmatites are primarily being targeted by ORP for tantalum minerals and spodumene. In fact, the company has already executed an extensive mapping and sampling program which resulted in the identification of 15 well-mineralised pegmatites at the project.

The program received encouraging results delineating the potential presence of a substantial tantalum resource along with minor lithium occurrences. The preliminary sampling program was followed by a limited drilling campaign. An operational tantalite mining operation, owned by Kazera Global PLC, is located within the boundaries of EPL 5047.

As for the September quarter, AM7 plans to – 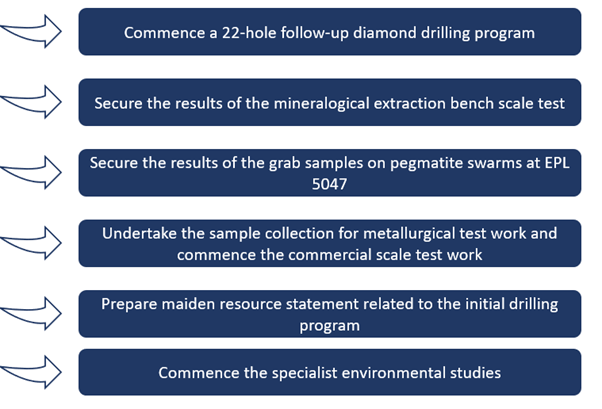 The Kum-Kum project includes exclusive prospecting licences, 6940, 7295 and 5047, in the neighbourhood of the Swanson project and stretches over an area of 787.61 km2. AM7 holds an 80% effective stake in the Kum-Kum Project.

Initial reconnaissance work has been completed on the three licences but is not sufficient to allow any exploration targets to be considered for JORC mineral resource classification.

The Karibib project includes the exclusive prospecting licence, 4663, located 45 km south of Karibib and stretches over an area of 409,86 km2. The project is in the immediate neighbourhood of the operational Navachab Gold Mine and the trending Twin Hills gold discovery.

The planned activities for the September quarter include –

The Bitterwasser Project includes 5 exclusive prospecting licences which stretch over an area of 3,438.94 km2.

The Bitterwasser Saltpan Complex adheres to the first order geological and environmental principles that are essential for the development of significant lithium clay and brine deposits. The historical exploration activities included a ground electrical conductivity survey, which indicated the presence of an anomalous electrical-conductive body, 20m below the current groundwater level.

Currently, the project does not hold any reserves or resources and is classified as an 'exploration project'. The project is considered to be prospective enough to warrant future exploration activities at the site.

AM7 plans to undertake a Hydrological study during the September quarter to determine the concentration of lithium and boron in the subsurface groundwater.