Troy Resources Limited (ASX:TRY) was established in 1984 and was listed on the Australian Stock Exchange in 1987. The Company made its debut in the gold exploration world through a group of tenements located in Southern Cross in Western Australia. The Company achieved its breakthrough from the development of the Cornishman Stage 1 Project, which changed Troy’s profile from a mineral explorer to producer.

The Cornishman Stage 1 paved the way for other projects in the region, and Troy soon started its operation on the Cornishman Stage 2 and the Pilot Project. These projects generated sufficient funds for the acquisition of the Bulchina Project in the Sandstone region.

The first successful production at the Bulchina mine was done in 2002. Subsequently, Troy entered into a JV with Sons of Gwalia (ASX:SOG) for the exploration and development of the Cornishman Mine. Troy was appointed manager of the project with a 49% interest. The mine ceased production in 2004.

After Bulchina, Troy made its next foray into Lord Henry and Lord Nelson deposits in the Sandstone region. Lord Nelson was brought into production in 2005, followed by Lord Henry in 2006.

In 2006, Troy acquired another Brazilian project - Andorinhas Gold Project from Agincourt Resources. The processing plant from Goiás Velho Project was relocated to the new project location as it ceased gold production in 2007. The Andorinhas Project came online in 2008 just after 18 months of acquisition.

In its series of acquisition bids, next came the Casposo Gold and Silver Project in Argentina. The project was acquired in 2009, and the first gold was poured in November 2010.

In a strategic move, Troy acquired ASX-listed Azimuth Resources during the second half of 2013. Azimuth was the operator of the Karouni Gold Project in Guyana. The Karouni Project is an advanced project which has delivered significant gold production. The first batch of gold was poured in November 2015, and since then, Troy has continued to add a resource to the overall project and explored new mines to carry on production and increase the life of mine (LOM). 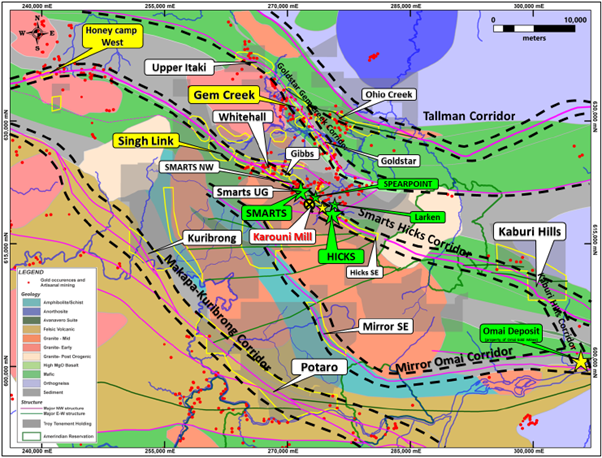 During the June 2021 quarter, Troy earned a revenue of US$10.1 million from gold sales in the heavily rain-affected quarter. The operations did not run at their full capacity as heavy rains, and government guidelines for flood-affected the mining operations.

Smarts Underground will become the main source of mill feed. Work on geotechnical assessment report is advancing, and the mine optimisation and stope design are worked upon.

Since its inception, Troy has grabbed opportunities available to it to create value for its shareholders. The track record of the Company shows that it moves swiftly from the project exploration to the production phase. The Karouni Project represents the greenfield as well as brownfield potential. The agreement with Barrick Gold for exploration tenements will add value to the project and Company as a whole.