Graphite Turnaround- What is the Market looking At? SYR Resources on Charts

Graphite markets across the globe are once again capturing the eye of the global investing community over the reviving economic conditions in China. Recently the natural flake graphite prices were under pressure and kept shares like Syrah Resources Limited (ASX: SYR) under duress with prices falling from $0.740 (intraday high on 15 January 2020) to the level of $0.150 (intraday low on 19 March 2020), which marked a price plunge of ~ 79.72 per cent.

Also Read: Orocobre Records 32 per cent Plunge in Quarterly Revenue, While Syrah Takes a Hit of 62.5 per cent

While the price of natural graphite still remains soft in China, the global outlook over lithium and penetration of the battery storage devices across the global front is providing much cushion to the graphite market, which despite being in pressure due to the uncertainty around COVID-19, is anticipated by many industry experts to gain momentum ahead over the underlying long term focus on decarbonisation of the transport sector via lithium-ion powered EVs.

The graphite market had also witnessed the lower demand due to the COVID-19 outbreak; however, despite that Chinese firms are committed to their USD 26 billion stimulus to the battery value chain, inferred from China pubic market capital raisings, which aims to use the funding to build the battery supply chain.

Apart from Chinese firms, the battery supply chain has also got a global commitment, which could support the graphite demand ahead.

The Ongoing commitments by supply chain participants and Governments ex-China include a USD 5.44 billion investment into 64 gigawatt hours of battery capacity by PSA and SAFT. Likewise, the European Commission has approved USD 3.5 billion for battery tech R&D, while General Motors (or GM) has decided to commit USD 2.2 billion investment for Detroit factory over four years to make electric trucks, SUVs.

While the above-mentioned commitments are just an example, there has been a lot of development and planning underway for the battery sector, which, in turn, is further supportive for the graphite industry.

Furthermore, while the demand side of the commodity has commitment and projects to firm the roots, the supply side has witnessed a fundamental shift with China becoming a net importer of natural graphite from 2018.

The Turning Table and SYR

Presently, SYR is trying to leverage the fundamental shift in the graphite industry through its Balama asset, which aims at developing an integrated battery anode material and industrial products.

The global stance towards decarbonisation or net carbon neutrality is currently supporting the penetration of electric vehicles.

Recently, post witnessing a temporary closure of its Battery Anode Material plant in Louisiana, USA, during the March 2020 quarter, SYR suggested that the operation restarted from 1 May 2020 with specific protocols to enable the safe restart.

SYR also suggested that it would conduct minor repairs to enable final process and product specification optimisation, which is required to purify spherical graphite (samples of anode precursor material) for qualification with potential customers. 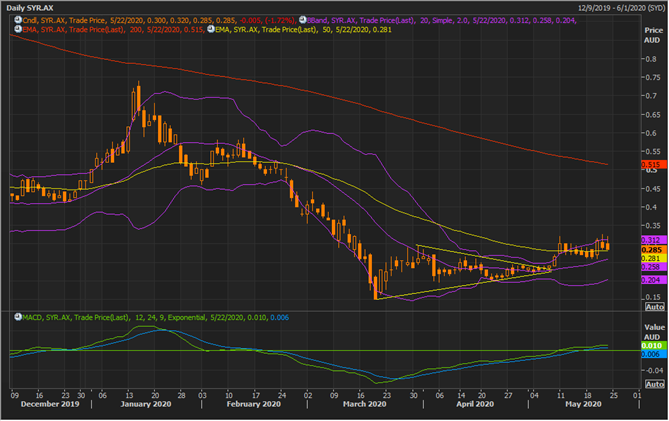 On the daily chart, it could be seen that the stock has given a breakout of a triangle formed after a recent downside rally and near the bottom and is currently sustaining above the same.

SYR is currently testing the +1 Standard Deviation from the 20-day simple moving average or the mean value of the Bollinger band after trading around the -1 SD of the band for quite some time; however, the 50-day exponential moving average, which is yet above the 20-day SMA (bearish sign) would act as the support for the stock.

The stock is currently trading below the 200-day EMA as well, suggesting that in the short-term SYR could mean revision revert. The 12,26,9 MACD is giving a positive signal, and investors should monitor the level of 50-EMA, which should act as the immediate support, followed by the mean value or 20-day SMA, -1 SD of the Bollinger, and ultimately the previous breakout level, which should be decisive in nature ahead, as a price sustenance above the same with decent volume could seed bullish sentiments, while failure to do so could attract bulls. 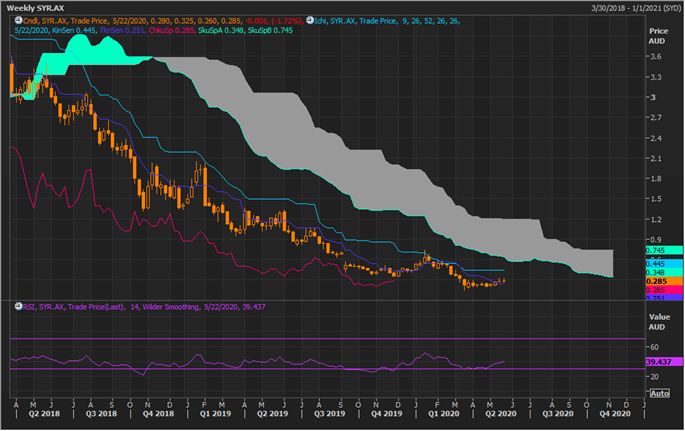 On following the weekly chart, it could be seen that the stock is currently trading below Span A (mean value of the conversion line and the base line), which is itself below Span B (or the mean value of 52-week high and low), reflecting on bearish sentiments.

The conversion line (dark blue) and the base line (sky blue) are also showing a negative crossover after turning positive for a while during the initial quarter of the year, and the crossover has taken place below Span A, which in turn, further suggests that bearish sentiments yet prevail around the stock over the longer timeframe.

The stock of the Company last traded at $0.285, down by 1.72 per cent against its previous close on ASX.