The Company is advancing with the Phase 1 development of the West Erregulla Field, located in the EP469, a 50%-50% Joint Venture between WGO and Strike Energy (ASX:STX). 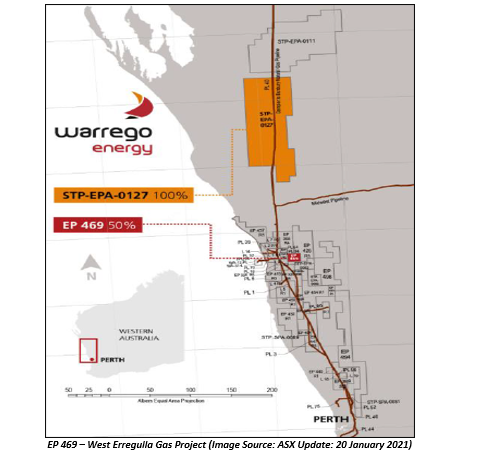 Warrego and its JV partner Strike Energy took a decision to suspend further drilling on the WE-3 well. The drilling operation faced many operational challenges due to a loss of the bottom hole assembly (BHA) and an issue with a slip and sealing assembly. The Company has to opt for side-tracking of the well after the unsuccessful fishing job.

Hydrocarbon shows were observed in the Dongara and upper Wagina sandstones while the WE-3 well drilling. The presence of the Carynginia Shale formation has surprised the operational team, and the well design needs to be reevaluated to overcome the over-pressure of the formation.

The Company has cement plugged the well for the time being and will initiate drilling operation once the evaluation and required design for well is complete. The rig has been moved to the WE-4 location and the well was spudded over the weekend. 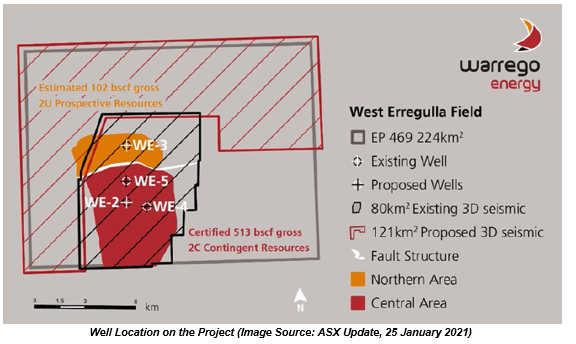 For the field development, partners have signed a binding Heads of Agreement (HOA). The JV has chosen the Australian Gas Infrastructure Group (AGIG) as the preferred contractor to build, own and operate the gas processing facility for the Phase 1 field development stage.

The gas produced will be supplied to Alcoa under a long-term contract for 155PJ of gas. To meet the supply obligation, the Company needs to set up a gas processing facility with a capacity of 80 TJ/day.

The FEED study for the gas facility is expected to be completed by Q1 of 2021. After that, the JV partners will take a call of FID during H1 of 2021.

The JV partners have also put the WE-5 well into current drilling program.

Warrego has applied for an exploration permit for 2.2 million acres of onshore area in Western Australia. The Company is engaged in discussions with native title groups for the land title.

Warrego owns an 85% interest in the project. It is a conventional sandstone gas reservoir with an estimated gas reserve of 830 BCF. The Company has applied for permits and approvals for drilling operations.

The project is an integrated gas production and power station operation. Warrego owns a 50.1% interest in the project, which involves three producing wells. The project contains 13 prospects that provide a low-cost field development opportunity.

Good Read: Crude oil bulls stare at USD 60 a barrel, forecasts and estimates you should know

Warrego raised A$32 million through a placement in two tranches. Of the total, A$26 million was raised in the first tranche and A$6 million in the second tranche.