The fintech space has seen a tremendous growth innovation in recent years, continually disrupting the traditional business models. The latest buzz in fintech space is the “Neobanks”. As unique as the name sounds, Neobanks are no way closer to a traditional bank and are taking the banking industry by a storm.

Recently Douugh limited (ASX:DOU) became the first listed player in the space, giving an astounding return of more than 1500% within a few weeks of listing. Although Douugh is the only listed player, the market is getting crowded with other private players like Xinja or UK based Revolut.

So, what is a Neobank and how it works?

Neobank is a digital bank that has its entire presence online without any physical presence through the branches. These banks provide a host of financial services like money transfer, lending etc. and majorly cater to the tech-savvy customers.

Due to the heavy use of data-driven technologies for the online infrastructure, these banks can provide more customized services to the clients, which makes them more customer-centric. Some of the advantages of these tech-enabled online banks are:

Everyone is aware of going to a bank branch, filling out the form, waiting in the line, and submitting identity proofs. This tedious process has been taken care of by these digital banks and accounts can be opened right at the palm of your hand, from anywhere.

Due to a high reliance on the online platform, their platforms have to be user friendly which they are. These fintech banks spare no expense when it comes to providing a beautiful, seamless and integrated user interface for their platforms.

ALSO READ: Opportunities and Challenges for Neobanks in the Present Scenario

Douugh is a next-gen Neobank trying to disrupt the traditional banking model with its proprietary Artificial Intelligence technology. The aim of the company is to make financial lives of the customers better by helping them to manage their money more efficiently.

On 17th November 2020, the company announced its entrance in the US market by launching its money management app after 18 months of beta trials. The app offers FDIC (Federal Deposit Insurance Corporation) secured smart bank accounts with Mastercard/Apple pay enabled debit. 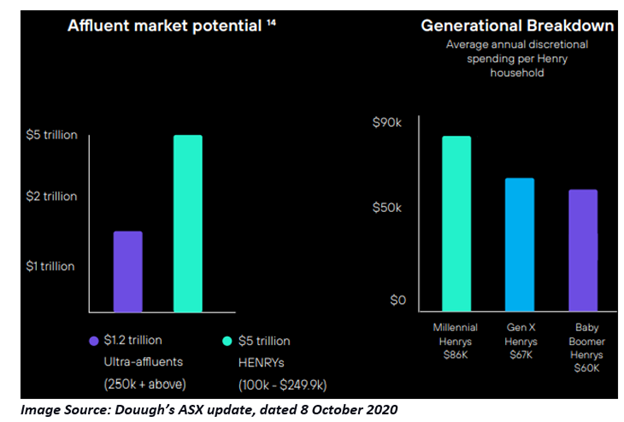 Douugh is tapping one of the fastest-growing income segments in the U.S. consumer market, which is classified as HENRY (High Earners Not Rich Yet). In the US there are some 31 million affluent households including 27 million HENRYs earning US$100k-$249.9k. Besides, there are 3.8 million ultra-affluents earning above US$250k. This affluent segment has grown by 25% in the last four years.

It already has a detailed plan to tap the potential customers via Google’s AI-powered ad binding platform with extensive focus on online and social media marketing. The company is also betting heavily on its industry’s first “Bills Jar” feature linked with a virtual card, helping them to pay their bills on time. The feature intelligently flags all upcoming invoices recurring subscriptions, eliminating the pain of remembering them.

This feature has also been complemented by other key features like Savings Jar, Rainy Day Jar etc. The upcoming Autopilot and Investment Jars are scheduled to be rolled out in a coming month.

Douugh recently entered the secondary market with its IPO price of $0.03 and closed with more than 100% gain on the listing day itself. But it didn’t stop there, by mid-October it had already surged by more than 1500% from its issue price at its peak of $0.49.

Revolut is another Neobank based in the UK and has launched its services in Australia a few months back. The company is already up and running with more than 30k registered customers. However, it has been in the Australian market for more than nine months but running its services under the beta mode.

Revolut operates on an opt-in subscription-based business model. This allows customers to use the app for free but would need to pay a monthly fee for some premium features. The services offered include cryptocurrency trading which has become a hot buzz after the recent rally in Bitcoin.

Xinja is another 100% digital bank in Australia, giving a head-on competition in the space. The company’s purpose is to make customers make better decisions with their money with convenience and ease.

Recently, the company came under the spotlight after it came in talks to close a $433 million investment deal from Dubai’s World Investment Group (WIG), announced earlier in March 2020. However more than a strategic move, it is the need of the capital to sustain the business operations that led to the deal, Xinja’s auditors PwC noted.

In 2019, the company suffered a net loss of around $36 million and is struggling to maintain an adequate capital base despite a $55 million fundraising earlier this year.