On 8th December 2020, G8 Education Limited (ASX: GEM), a quality early childhood education provider, released its latest trading update for November CY20 YTD. The company has continued the recovery in the like-for-like occupancy, which is currently at 75.5% but an occupancy gap of almost 4.5% still remains compared to the last year. The Covid-19 disrupted the usual seasonal uplift that occurs from February to July which has been re-established. 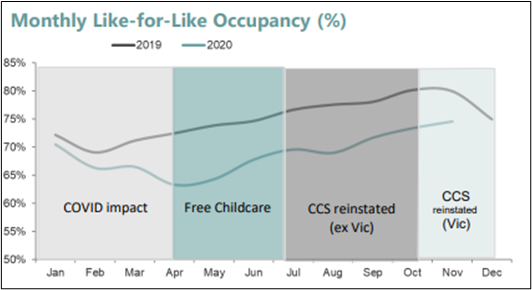 The company reported an underlying EBIT of $98 million for November CY20 YTD. This includes current year Remediation program costs. It has also been able to increase investment in resources worth $1.1 million and R&M worth $7.4 million in Q4 due to efficient cost management and significant government support.

Capital expenditure has been estimated to be around $31 million for CY20, in line with the expectation with a cash neutral position.

The wage efficiencies have been delivered in line with the target for this year, majorly on the back of utilisation of the technology platform that forms part of G8’s new rostering system. The improvement in efficiency reflected in higher-wage hours per booking with lower occupancy levels in CY20 relative to the same period in CY19. 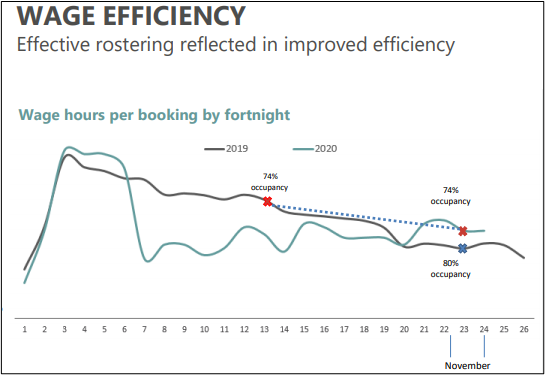 The wage hours have been increased from October, indicating normalisation of attendance levels. However, lower occupancy has resulted in inefficiency reflected in the higher wage hours per booking in November relative to the prior year.

The company expects the next year to be a year of recovery, and the company will be ramping up its pace of improvement program. In CY21, G8 Education will be spending $4 million on ten new greenfield centres. Although based on current centre opening dates, the company expects start-up trading losses of $4 million in CY21 but strong returns are expected over the medium term.

Approximately $10 million in capital expenditure would be released in CY21, deferred from CY20, which would increase the total estimated capex to be a minimum of $50 million.

*All financials in AUD, unless specified