The Australian share market closed lower on  Wednesday, weighed down by sharp losses in health care, energy, utilities and banking stocks. The negativity prevailed in the market after Australia's major banks predicted sooner-than-expected rise in interest rate. Commonwealth Bank of Australia expects interest rate to rise by the end of 2022. While ANZ expects the Reserve Bank of Australia to begin tightening rates in H2 2023 and to take the cash rate to 0.5% by 2023-end, Westpac estimates cash rate hike by early 2023.

On the other hand, information technology was the top performer with 1.1% gain, tracking overnight gains in its US counterpart. Materials sector also closed higher by 0.77%.

However, the RBA, in a fresh communication, reaffirmed that it did not expect to start lifting cash rates until 2024 “at the earliest”. In the last policy meet in June, the RBA kept its monetary policy unchanged with rates continue to be at 0.1%, citing that inflation and wage pressures remained subdued, despite recovery in the economy and employment. 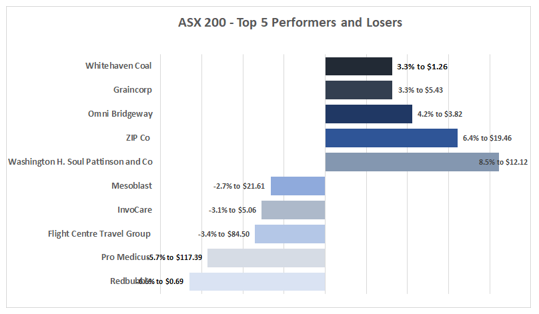 On the flip side, Washington H. Soul Pattinson and Company (ASX:SOL) was the top gainer on the ASX, rising 8.46%. ZIP Co Limited (ASX:Z1P), Boral Limited (ASX:BLD), Uniti Group (ASX: UWL) and Chalice Mining Ltd (ASX:CHN) were among other top performers.

Shares of Aventus Group (ASX:AVN) rises 0.65% to AU$3.110 on a strong portfolio valuation. The company’s net valuation increased by AU$254 million to AU$2.3 billion as at June 2021. This valuation uplift will reduce Aventus’ gearing to the bottom of the range and will result in a substantial rise in Net Tangible Assets per security.

Respiratory health management firm Respiri Limited (ASX:RSH) announced the commencement of sales of wheezo across 570-plus pharmacies within the Sigma Healthcare network across Australia. As per the ASX announcement, Respiri has onboarded 14 pharmacy banner groups, with a total pharmacy network across Australia of around 1,600 stores. Following the announcement, shares of company rose 10% to 7.7 Australian cents.

Shares of Washington H. Soul Pattinson and Company Limited (ASX:SOL) extended gains, rising 6% to AU$32.35 per share after the company struck a deal to buy Milton Corporation Limited (ASX:MLT). The company aims to create a near-AU$11 billion investment to bolster its firepower to tap new asset classes, including global equities. It is offering AU$6 per share in the deal valuing Milton at AU$4.05 billion.

Shares of Novonix Limited (ASX:NVX) rose as much as 10.3% to AU$2.360, marking their biggest intraday percentage gain since 28 May 2021. The Company stated it was under contract to purchase a second facility in Chattanooga, Tennessee, in order to expand its anode material business.

Shares of Adacel Technologies Limited (ASX:ADA) gained as much as 3.4% to 91 cents. The aviation simulation developer has secured a new contract worth AU$3.6 million from Seychelles Civil Aviation Authority (SCAA) to modernise its air traffic management system.

Shares of Decmil Group (ASX:DCG) rose as much as 4.4% to AU$0.475, marking their best session since 18 March 2021. The construction firm stated that it had secured contracts in energy and infrastructure sectors with combined revenue of about AU$47 million.

Shares of West Wits Mining Limited (ASX:WWI) gained as much as 8.86% to 8.6 cents. The gold explorer has received an update from the Department of Mineral Resources (DMRE) and Energy concerning the mining right application for its Witwatersrand Basin Project in South Africa.

Asian markets continued to trade higher, holding opening gain, tracking from cues from Wall Street, which ended higher overnight. Taiwan’s Weighted Index is the top performer in the region, rising as much as 0.95%. It was followed by Hong Kong’s Hang Seng with 0.7% gain.

On Tuesday, Wall Street ended higher as investors shrugged off inflation worries. The Dow Jones rose 0.2%, the S&P 500 gained 0.51%, and the NASDAQ Composite added 0.79%. Amazon shot up 1.49%, boosting the S&P 500 and NASDAQ, as it entered the second day of its multibillion-dollar online sales event, Prime Day.