Galan Lithium Limited (ASX: GLN), established in 2011, is a metals and mining industry player that acquires, explores and develops minerals including lithium, tin and tantalum deposits.

On 29 May 2019, Galan Lithium informed the market that it had received the initial assays results from the fifth drillhole (C-05-19) at the Candelas Lithium Brine Project (wholly owned) in Catamarca province, located in the northwest of Argentina. This marks the end of Stage 1 of the maiden diamond drilling campaign at Candelas.

The fifth drillhole is located approximately 2.5 kms south of the maiden drillhole (C-01-19) and around 1.8 kms west of C-03-19, as illustrated in the figure below. 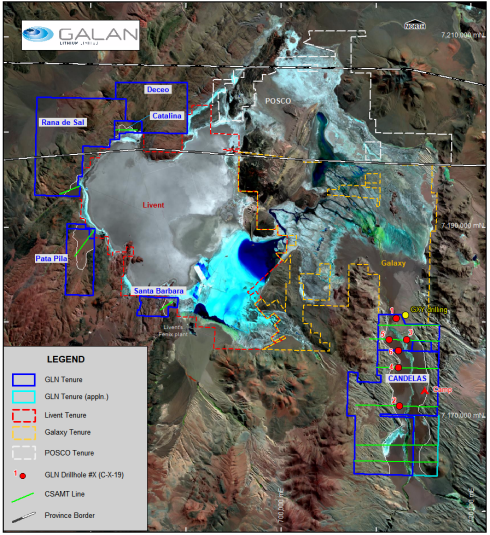 Following downhole geophysical logging at drillhole C-05-19, the company performed several packer tests and the samples collected were sent for analyses. As per the company, the currently prevailing extreme cold weather has led to the delay in operations and also the final sampling to be completed on project site. However, the lab results for C-05-19 demonstrate good lithium grades from the brine horizon from 220 to 380 m ranging between 491 -856 mg/l Li as briefed in the Table 1 below. Moreover, the recorded impurity levels have been consistently low (values returned with Mg:Li ~2.60).

Meanwhile, the drillhole C-06-19 has also been completed under Stage 2 of the drilling campaign, as reported, to a depth of 422 m after encountering basement at 419 m. The field results from packer tests conducted before operations had to cease encountered brines with SG ranging from 1.09 to 1.13 for the last 42 m of the drillhole.

Currently, the company is on standby and preparing to kickstart operations as the weather settles. As the activities are resumed, Galan plans to complete the sampling on C-05-19 as well as new ascending packer tests on C-06-19 to trace the brine horizon and its thickness.

Stage 2 of the drilling campaign has recently started with C-06-19 drilling as permits were received in mid-May 2019. With crucial milestones achieved so far, Galan Lithium expects to define a Maiden Resource estimate in the foreseeable future, most likely by Q3 CY2019.