Penny stocks are those publicly traded stocks that have market capitalisation of less than $ 300 million and more importantly their stock price is less than A$1. The stocks under focus in this article fall under the penny stock category as their share price is less than A$1. Penny stocks are generally considered risky; however, they are preferred by several investors who hope for aggressive returns. In this piece of article, we will be discussing three penny stocks - FinTech Chain Limited, CommsChoice Group Limited and Bryah Resources Limited - which zoomed more than 15% on 5 July 2019 on ASX.

Let us have a look at the recent updates and stock performances of these penny stocks.

Listed on ASX in November 2012, FinTech Chain Limited operates as an investment holding company, providing system development and information technology services in the People’s Republic of China. Moreover, the company is engaged in providing investment management and consultancy services. With a market capitalisation of around $ 68.33 million and approximately 650.77 million shares outstanding, the FTC stock was trading at $ 0.125 on 5 July 2019 (AEST 03:40 PM), up 19.048% by $ 0.020.

The company negotiated and received an increased fee income of 0.03% under these three contracts, up from the 0.02% transaction fee which the company received in previously signed contracts.

These agreements highlight the efforts of the company’s business development and marketing team towards the T-Linx expansion program. Three more contracts in the province, with similar terms and conditions, are underway.

Interim Report for Year ended 31 March: Recently, FinTech Chain also released its preliminary final report for the year ended 31 March 2019. It was reported that FTC’s revenue grew 341% year-on-year (y-o-y) to RMB 44.2 million during the reported period, on the back of successful implementation of FTC’s blockchain technology resulting in RMB 15.4 million income and RMB 28.8 million revenue of T-Linx related products and services. During the year ended 31 March 2019, the company generated net profit attributable to members of RMB 3.76 million, compared with a loss of RMB 22.83 million in the same period a year ago.

Listed on ASX in December 2017 and headquartered in Sydney, CommsChoice Group Limited is engaged in serving its business clients in Australia and New Zealand with cloud-based communication and communication enablement services. It also offers services for voice and data networks. With a market capitalisation of around $ 5.78 million and approximately 140.94 million shares outstanding, the CCG stock was trading at $ 0.053 on 5 July 2019 (AEST 03:25 PM), up 29.268% by $ 0.012.

Director Resignation: On 1 July 2019, the company reported the resignation of Director, Mr Stephen Bell, as part of the restructuring of its operations in Australia. The restructuring program, which was unveiled on 11 June 2019, includes the resignation of personnel as part of the proposed initiatives that are expected to deliver nearly $ 2.0 million in total annualised cost savings.

Successful Completion of Placement: CommsChoice Group Limited, on 13 June 2019, made an announcement regarding the successful completion of a new fully paid ordinary share placement program, which it intends to settle in two tranches. The placement will result in the issue of approximately 25.9 million shares. Through the placement, which was oversubscribed, the company is aiming to secure approximately $ 1.0 million.

Under the first tranche, the company issued 15,400,000 shares to professional and sophisticated investors and management of CommsChoice. While, under the second tranche, shares will be issued to the Directors of CommsChoice, for which the company will seek shareholder approval during the general shareholder meeting during the second half of July 2019.

Share Purchase Plan: The company announced its share purchase plan (SPP) on 17 June 2019. Each eligible shareholder can avail the opportunity of acquiring up to $ 15,000 of new fully paid ordinary shares in the company at an issue price of $ 0.04 per share. The price represents a discount of 34.7% to the volume weighted average price of the company's shares over the five ASX trading days immediately preceding the date the offer.

Copper-gold-manganese focused explorer, Bryah Resources Limited is a member of the Association of Mining and Exploration Companies. The company, which got listed on ASX in October 2017, is engaged in two projects, which are located in central Western Australia. With a market capitalisation of around $ 4.08 million and approximately 63.70 million shares outstanding, the BYH stock was trading at $ 0.085 on 5 July 2019 (AEST 03:53 PM), up 32.812% by $ 0.021.

Manganese identified at New Cheval Prospect: In an ASX announcement on 5 July 2019, the company reported the identification of a new manganese exploration prospect, as a result of ground reconnaissance and mapping, within the Bryah Basin in central Western Australia. 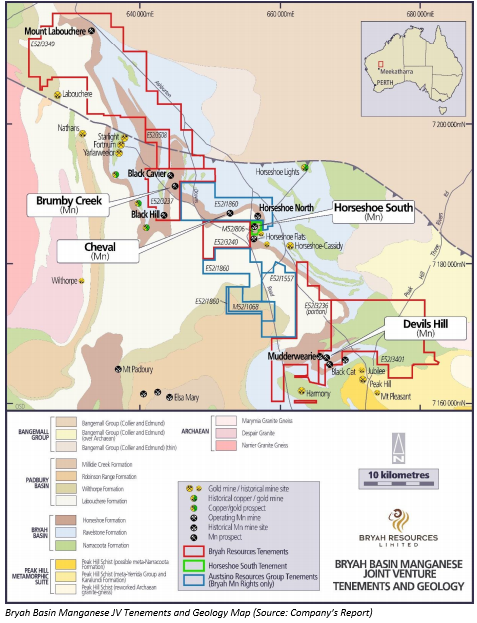 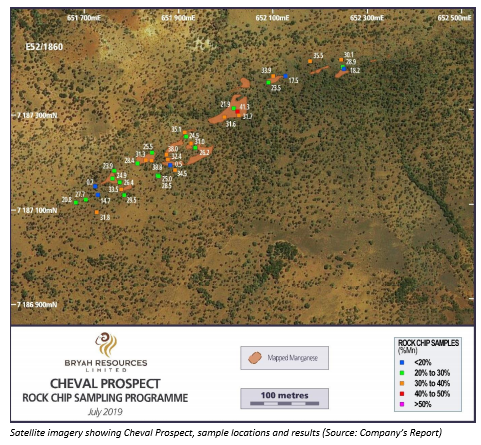 The new Cheval Prospect is untested by drilling, and the company will need a heritage survey and approval from the Department of Mines Industry Regulation and Safety programme to start any drill testing.

Significant Manganese Intersected in Bryah Basin: According to another company announcement on 4 July 2019, it identified manganese mineralisation at the recently discovered Brumby Creek Prospect during the exploration drilling activity. The company has collected composite samples for preliminary metallurgical test work. Further details related to the intersection can be read here.