Iron Ore and Copper: The Tale of Two

Iron ore, which is the primary precursor required to manufacture steel, is essential for an economy’s development. Often consumption of steel is perceived to be related to the economic growth of a country.

While the Chinese economy is gearing up for recovery, the government is bound to restart construction and infrastructure projects. Iron Ore Futures on the Chinese Dalian commodity exchange have gained, on the back of steady growth in steel mills and concerns over supply disruptions from Brazil. The DCE Iron Ore 1-month future traded at RMB 803 a tonne on 16 June 2020. 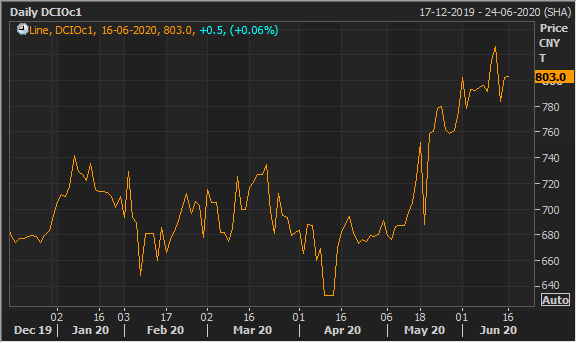 As per few reports, the Chinese government is directing stimulus funds into infrastructure and construction projects. Steel plants in the country are ramping up output with utilisation rates increasing to ~92.35%, as per MySteel for the period 5-11 June 2020.

Recently, the China-Australia bilateral ties have been affected adversely, after Australia’s call for an international investigation into the origins of coronavirus and its spread. According to data from the World Steel Association, Australia accounted for approximately 60% of the global iron ore trade in 2019.

The recent anniversary of the Tiananmen square massacre was observed, globally, with multiple countries including the historic colonial power of the Great Britain talking against the untimely accession efforts by China in the recent days. With the global image shattering, China is one country to be wary of, especially after growing sentiments against the Asian country across the US, Europe and Africa.

Can economies really cut Trade ties with China? Must Read

Growing hunger for iron ore has hit a major roadblock with wildfire growth in coronavirus cases in Brazil, which has total confirmed cases of 850,514 with 42,720 deaths, as of 15 June 2020 (10 AM CEST), according to the WHO situation report.

An internal working group from the federal labour prosecutor’s office has been in place to monitor operations at Vale’s Carajas iron ore operations, the largest iron ore mine in the world. The internal group was earlier responsible for reviewing conditions of tailings dams at the mining operations.

A labour court recently ordered Vale to shut down three mines in its southern mining complex in the Minas Gerais province, owing to the outbreak of COVID-19 among workers in early June. Vale had earlier claimed that almost 75% of its employees and contractors had been tested for the virus.

Vale, which recognised a loss of nearly 15 million tonnes on its production guidance due to the virus spread, had revised down its guidance to 310-330 million tonnes in April 2020 due to excessive rain and shipping delays earlier this year. Further actions on any operating mines or Carajas alone may impact Vale’s performance for the year.

With all major economies now adapting to the new normal, countries such as France, Italy, Spain and India have already eased their measures, as a result, surge in demand for iron ore is anticipated from India, Europe, South Korea and Japan.

Copper 1-month futures prices gained ~23% since 23 March when prices hit the US$2.11 a pound mark. The gain in prices can be attributed to resumption of industrial activity in China and supply disruptions. Chile and Peru, the 2 of the top 3 copper producers, suspended operations to copper mining facilities, which is causing a major disruption in copper supply, pushing copper prices further north.

COMEX Copper 1-Month Futures traded at US$2.59 a lb on 16 June 2020. Growth in demand from infrastructure and clean energy is expected to give a substantial boost to copper prices in the future. 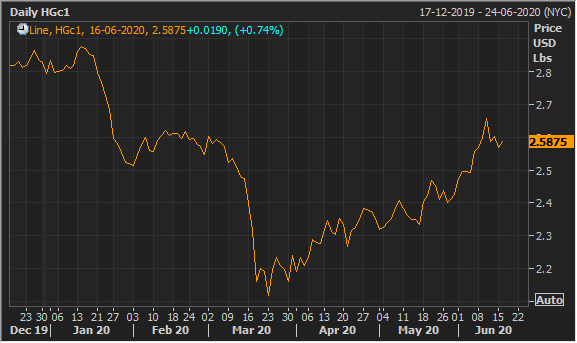 With improvement in China’s manufacturing PMI for the third consecutive month to 50.6 in May 2020, demand for copper has surged significantly, on the back of resumption of industries since the all-time lows in February of 35.7%.

Post pandemic, China is steadily approaching the normalisation, which is reflected in growing domestic demand for copper. With China’s stimulus package distributing loans at lower rates to boost the economy and infrastructure, demand for the industrial metal is expected to continue to grow. As the stimulus program is majorly focused on new infrastructure and urbanisation, massive amount of copper would be required.

Although United States is showing improvement with the Institute for Supply Management’s PMI figures reaching 43.1% in May from 41.5% in April, a long way to normalisation is anticipated in the country, which is still fighting the pandemic. US has registered over 2 million confirmed cases of coronavirus with a low recovery rate of ~25% and a death rate of 5.75%. However, as the manufacturing sector contributes almost 11% of the US economy and PMI levels are growing, signs of improvement in the world leader are visible.

During the global quarantine, world’s most polluted cities including Beijing and New Delhi witnessed drastically reduced PM levels and extremely low GHG & non-GHG emissions. With thermal coal responsible for almost 38% of global power, the world now seeks a transition to a cleaner power source, which is evident from substantial increase in uranium prices during the quarter. A substantial demand for copper is expected to come from the power sector during its journey towards sustainable and cleaner renewable sources.

With the emerging economies getting a breath of clean air, a substantial jump in electric vehicles can be anticipated. Developing nations with large middle-class population such as India, which has only 22 cars per 1,000 inhabitants, may see new normal buyers for EV as their first cars, completely jumping the entire century long advancement phase of cars from Ford’s T model to today’s ICE cars.

Such huge transition would require a major push from the government via subsidies and other relaxations. EVs can now be considered as a major demand generator for the copper market in upcoming years.