Buy now pay later is a rapidly growing industry which allows customers to purchase any product or service instantly and pay for it over time. According to Australian Securities & Investment Commission (ASIC), few buy now pay later providers provide its customers fixed term contracts for up to fifty-six days for amounts totalling up to $2,000 while others offer a line of credit for amounts totalling up to $30,000.

The major strength (60%) of the customers using the buy now pay later services are in the age range from 18 years to 34 years.

There are many companies which provide the buy now pay later services listed on ASX. In this article, we would discuss Sezzle Inc (ASX: SZL), a US-based company, recently listed on the ASX (30 July 2019).

Sezzle Inc. is a fast growing fintech company which aims to financially energize the next generation. It offers its customers with interest free instalment payment plan at online stores, helping customers in increasing the buying capacity, sales and basket sizes for over 7,500 active merchants which provide SZL the US and Canada.

On 2 December 2019, Sezzle released an announcement where it highlighted that it has secured a US$100 million debt funding facility with a syndicate of lenders. Itâs business of funding purchases by End Consumers needs the capital so that it can pay retail Merchant Clients, ahead of the collection of the purchase price instalments from those end users.

The company considers this significant increase in the new debt facility over its previous debt facility as a key plank in its growth strategy that would help in growing its business aggressively. It sees a huge growth opportunity in the BNPL sector in the North American market, and this new Facility Agreement would help the company to take advantage of these opportunities. Sezzle also confirmed that the new facility would replace its prior debt facility.

The shares of SZL, post the release of this announcement, closed at $2.52, up by 5% as compared to its previous closing price. SZL has a market cap of $426.86 million and approximately 177.86 million outstanding shares.

As highlighted above, Sezzle is an US-based company and has made its debut on the ASX on 30 July 2019. The company continues to perform strongly with both merchant and customer sign-up in Canada. It has seen a growth in its merchant acquisitions over time, with few merchants in pipeline.

Sezzle, the fastest rising 'buy now, pay later' platform raised ~$43.6 million when it made its entrance to ASX. The funds raised through the IPO supported the company to expand its presence in the US and Canada e-commerce market. Sezzle, which provides payments platform for fast payments platform, operates in the payment sector in the retail industry. The company and its platform were launched in 2017 when the companyâs founder tapped an increasing trend in the US, pertaining to the lack of credit for consumers, especially young people. The founders felt that the short-term consumer finance products were not user-friendly, were not structured and designed well to facilitate digital commerce.

Sezzle has an attractive and a disruptive business model that is disrupting traditional short-term financing products and has features like:

Sezzle, in its Prospectus, highlighted that it has a large market opportunity. Itâs existing in-market product is relevant to various retail segments (online) and service categories where the end-users wish to stagger payments over a comparatively small-time interval without experiencing extra costs or entering a traditional loan. 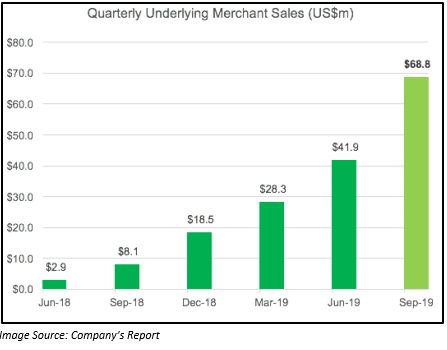 As per an announcement released on NASDAQ, the companyâs CEO and co-founder Charlie Youakim stated that Australia is several years ahead of North America in offering a flexible approach for the customers to make payment over time. The choice to get listed on the Australian Stock Exchange reflects the familiarity with 'buy now, pay later' payment solutions of the Australian investors. He also said that in the US and Canada, the company has seen firsthand the demand for its payment platform and is excited to provide the most consumer-friendly solution that empowers young people financially.

The fund raised by the company via IPO had an objective to support in the scaling of its business, step into new verticals, invest in technology, and link in a meaningful manner with its customers.

Post the IPO, the company released an announcement where it highlighted that it has extended its reach eCommerce merchants around the world via Visaâs CyberSource Platform. This platform helps the eCommerce merchants to provide its customers with popular deferred payment solution.