Why is Australia a key destination for Singaporean e-scooter start-up, Neuron Mobility

The Australian Motorcycle markets reported a deep 11 per cent loss in the first half of the financial year 2019 forecasting the worst year in the last three decades. The negative trend in the motorcycle market increased by the weakest GDP growth in almost a decade and all the brands of the motorcycle’s manufacturer felt this effect.

Electric Scooters which is commonly referred to as E-scooter are two or three-wheeled vehicles operated by electricity. The electric power is stored in the reusable electronic battery. One of the major concerns among the users of e-scooter is slow charging of electric batteries. The e-scooter manufacturers have addressed this issue and are investing in the R&D Department to cut the battery changing time and increase the per km average of these vehicles. 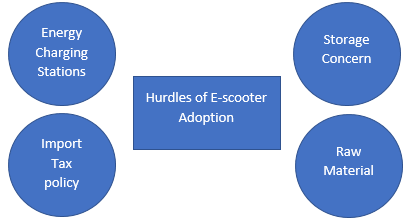 There has been an increasing trend among the manufacturer of E-scooters to establish the battery swapping station, which provides convenience to the users. For Example, the Tesla Motor is building a charging station of nearly 120kW in Europe, Asia and North America.

The developments of these charging stations undertaken by the manufacturer of E-scooters overcome the hurdle of E-scooter adoption to some extent.

The high fuel prices have led to the reduced sales of fuel-powered vehicles, and the customers are now shifting to E-scooter market.

Why Investors are Investing in E-Scooter Market

The Electric scooters are basically taking the consumer demand for single transport. The increasing demand among the consumer for light vehicles to cover the shorter distance are the major driving factor for the use of E-scooter vehicles.

E scooter transportation mode not only reduces the number of commuters on the road, but it is also eco-friendly. Cost-effectiveness is the added advantage for the e-scooters.

According to the recent study by a US company, more than 50 per cent of cars trips taken across the United States is less than 5 miles. This makes lightweight E-scooter transport mode to be a profitable option with the consumers.

It is predicted than the E-scooter market segment could be worth approximately $22 million by 2024.

Neuron Mobility was founded in 2016, the company provides a short-distance mobility solution to its users. It is one of the rapid growing shared electric scooter operator and technology developers in APAC region. For its commercial graded scooter, the company maintain a proprietary supply chain and uses real-time analytics to power its operational implementation.

The company initially started its operation in Singapore now expanded in cities like Thailand, Malaysia, Australia and New Zealand.

The company N3 Scooter is the first Commercial electric scooter produced for the sharing economy. The N3 Scooter has a ruggedised design and hardy exterior, to provide a comfortable and safe ride.

On 9 December 2019, the company has closed the $18.5 million of financing round to scale up its business into international markets.

The company’s new financing round Series A was funded by Square Peg Capital, GSR Ventures, and other investors. SEEDS Capital and Seed Plus, which are the company’s existing investors also participated in the round and the E-scooter start-up has raised about $23.5 million to the date. The company’s e-scooter facility is available in affordable prices. In Brisbane, anyone can start of the trip with the company’s bike by paying 38 Australian cents for each minute of the ride.

According to the recent company’s statement, fresh capital will be used to speed up the expansion in New Zealand and Australia.

The speed of the electric scooter can go as fast as 25 Km per hour and slow down to certain places such as schools, hospitals etc.

On a Single Charge, the bike can ride, cover an approximate distance of 60 Km. These scooters are equipped with an expendable battery. It means that a customer can drop the bike at the nearby parking stations after completing the ride. The company works with a large number of peoples who swaps their batteries on these E-scooters.

According to the company’s founder, Zachary Wang, the scenario is now changing, and the world is moving towards the adoption of micro-mobility services into cities of all kinds and in different sizes in the forthcoming years. The implementation of scooter-sharing programs can only be successful if there is a strong pact between local governments and technology providers.

On 26 July 2019, the company has deployed 600 E-scooters in Brisbane, after the city council of Brisbane selected the start-up from nine other global and local competitors.

The company’s ground operation team will take care of daily maintenance such as swapping batteries in order to ensure the smooth functioning of the scooter. The scooter plays a vital role in shaping future mobility in the metropolitan region.

Australia is considered to be a leader in future transport which includes micro-mobility services and making the country an ideal destination for next-generation trails. Brisbane is the second Australian city to implement Neuron E-scooter after the City of Darwin selected the company’s scooter in a 12-month trial in April 2019.