The below mentioned two Supermarket stocks have witnessed improvement in their share prices during today’s trade session. Let us take a closer look at their recent update and performances:

Australia’s leading retailer, Coles Group Limited (ASX: COL) is expecting to cut its costs via the strategy of “Smart selling”. In an announcement made on Tuesday 18th June 2019, the company announced that it expects to deliver $1 billion in cumulative savings by the financial year 2023. Coles intends to achieve this target by using technology to automate manual tasks which will reduce errors and reworks. Along with this, the company intends to simplify its above-store roles to remove duplication, in line with the company’s Smart selling strategy. Coles believes that these initiatives will help it to reduce the impact of rising costs including energy and labour.

With the release of this announcement pertaining to refreshed strategy, the share prices of Coles Group went up by 3.45%, settling the day’s trade at $13.210 with a market capitalization of circa $17.03 billion

Today, Coles Group announced its refreshed strategy to deliver on its vision of becoming the most trusted retailer in Australia. It also shared its intentions to sustainably feed all Australians to help them lead healthier, happier lives as it sets the foundations for a second century of sustainable growth. Coles Group’s CEO Steven Cain believes that Coles strategy will help it to differentiate itself in the Australian retail market.

Through its strategy, the company intends to create long-term shareholder value by growing revenue, reducing costs and generating enough cash to fund growth and innovation while delivering an attractive dividend payout ratio. 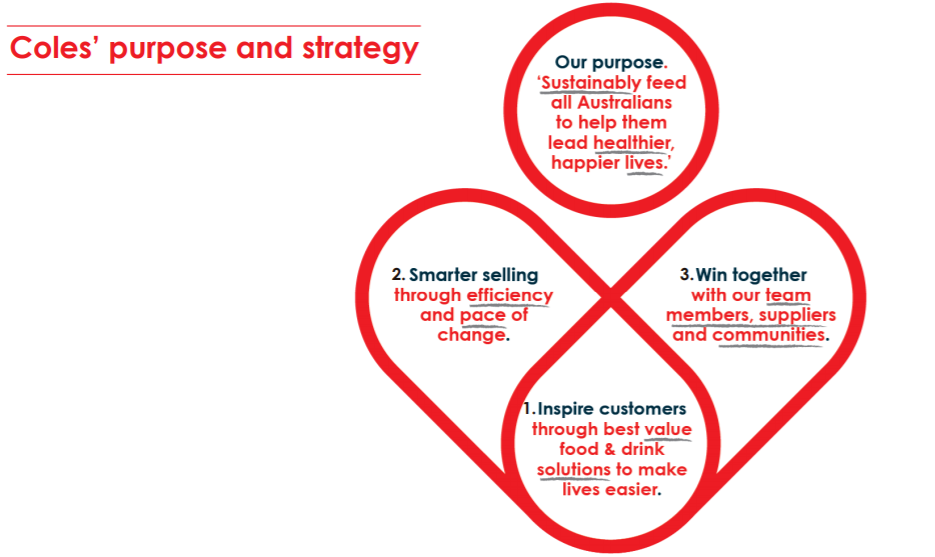 Steven Cain believes that Coles refreshed strategy will help it to lead in online business as well as to establish itself as an Own Brand Powerhouse and a destination for health.

The Company is going to focus on the growth of its Own Brand and will emphasize on improving the quality and reducing the costs through deeper and more collaborative relationships with suppliers that will foster innovation. Along with this, the company will allocate additional resources to drive incremental revenue streams including meat exports and leveraging the flybuys joint venture. Further, the company intends to leverage Australian and Coles credentials to support the development of new sales channels. Currently, Coles has a significant meat export business with around $400 million in annualised revenue across 40+ countries. The company is planning to expand into other product areas once meat strategy is scaled.

Further, the company is embedding sustainability processes across the business to improve outcomes in areas like energy use and waste that will help Coles to be recognised as Australia’s most sustainable supermarket.

In a trading update provided today, Coles announced that it will report its full year results on 22 August 2019. The company has also communicated that its Comparable Supermarket sales growth for the Q4 FY19 is now expected to be in the upper half of the range between the 2nd and 3rd quarter results, adjusted for the impact of New Year’s Eve. The company has also informed that its Net capex is within the guidance of $700m - $800 million. Capital expenditure is skewed toward growth and efficiency initiatives. Going forward, the company’s focus will be on gross operating capital expenditure given property capital expenditure and disposals are dependent on market conditions.

With the rapidly changing Australian retail landscape, it has become very important for retailers to take a careful look at their strategies in order to differentiate itself from competitors. Through its refreshed strategy, Coles Group Limited has taken a major step forward towards its vision of establishing itself as Australia’s most trusted retailer.

Coles Board has reconfirmed a target dividend payout ratio of 80% - 90% of underlying earnings from 28 November 2018 to 30 June 2019 which will be payable in September 2019. The company has advised that the Dividends are going to be franked to the maximum extent possible.

The shares of Australia’s another major retailer Woolworths Group Limited (ASX: WOW) were also up on ASX today, rising slightly by 0.99% by the end of the day’s session.

Woolworths was recently in news over its decision regarding “restructuring” which was opposed by SDA (Shop, Distributive and Allied Employees' Association). SDA has already lodged a dispute with Woolworths in the Fair Work Commission arguing that Woolworths had not consulted the SDA on the proposed changes for the new operating model and it has stated that proposed changes are in no way connected to the new Woolworths Agreement. As per the Woolworths Supermarkets Agreement, any major change from Woolworths requires proper consultation from members and the SDA in order to avoid or minimise job losses and to minimize the impacts from the changes.

Many media sites have reported that many employees who have been with Woolworths for a long a time are getting impacted due to the restructuring process.

The company recently announced the plans for investing A$30 million into a strategic partnership with leading subscription-based meal kit provider, Marley Spoon in order to grow both the Marley Spoon and Dinnerly brands in Australia, and to build operational synergies.

The company has recently completed the sale of Woolworths Petrol to EG Group which has enabled the Group to return $1.7 billion to shareholders by way of an off-market buy-back. This complements the $1.4 billion of dividends already paid to shareholders this financial year through the F18 final and special dividends, and F19 interim dividends.

Earlier this year, the company welcomed highly experienced Jennifer Carr-Smith to the Woolworths Group Board as a non-executive director. It is expected that the strength of the company’s Board will be improved by Jennifer’s extensive career experience including US online businesses Peapod and Groupon.

The company’s Board seems to be determined to capitalise on the opportunities ahead to make Woolworths Group a better business benefitting customers, team members, suppliers and, importantly, shareholders.