Products and services that are considered non-essential for consumers come under the category of consumer discretionary. The segment is driven by sustained improvement in consumer buying and purchase behaviour. Demand in this segment is typically much more elastic, which means it can plunge very quickly in case of a decrease in income of consumers.

Recently on 7 November 2019, JBH announced that UBS Group AG and its related bodies corporate became an initial substantial holder of JBH, with a voting power of 5.03 per cent.

For the financial year 2020, the company reaffirmed its previously announced guidance of total sales of circa $7.25 billion, out of which JB HI-FI Australia is expected to contribute $4.84 billion, while JB HI-FI New Zealand and The Good Guys are anticipated to account for $0.24 billion and $2.18 billion, respectively.

SGR, formerly known as Echo Entertainment Group, is engaged in the management of integrated resorts with gaming, entertainment and hospitality services. The company, which acquired Sheraton Grand Mirage in a JV, is the owner and operator of properties like Treasury Brisbane and The Star Sydney.

On 24 October 2019, the company released an update related to trading and expected earnings for 1H FY2020.

The company has provided an investment proposal to the Queensland government in order to create substantial tourism drivers for the Gold Coast. The proposal has three elements including commitments around The Star Gold Coast Masterplan, and upgrades and expansions to GCCEC and The Sheraton Grand Mirage.

Webjet is a digital platform for travel bookings across New Zealand and Australian region. The company deals with business to consumer and business to business clients. Its B2C division includes the Webjet and Online Republic segments, while the B2B Travel division consists of WebBeds, which has the Lots of Hotels, Sunhotels and other brands, providing coverage across several regions.

On 24 October 2019, WEB presented at the Goldman Sachs 3rd Annual Tech Day, highlighting the companyâs focus on the Asia-Pacific region.

During FY20, according to the company, APAC is on track to deliver the most bookings by region.

Jumbo Interactive Limited, headquartered in Queensland, Australia, operates as a retailer of national jackpot and charity lotteries on the online platforms. The company held its 2019 annual general meeting on 24 October 2019.

Mike Veverka, the CEO and Founder of the company, highlighted JINâs performance during the financial year 2019 ended 30 June 2019 unveiling a 64 per cent increase in revenue from continuing operations to $65.2 million. Additionally, the companyâs NPAT went up by 124 per cent to $26.4 million in the reported year. 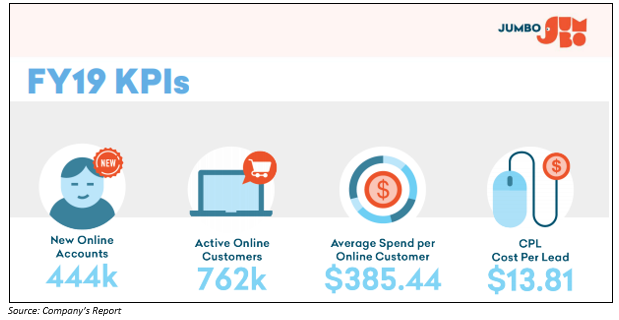 He also discussed new software platform, a game-changer for Jumbo, with which the company is reporting

By FY2022, the company is expecting $1 billion in ticket sales on the Jumbo platform, unveiled Mr Veverka.