Given the dynamic nature of businesses, which are prone to changes very often, companies require some time to hold their trading either to focus on an announcement or regulation, or in case of a much serious issue, that requires the trading of the company’s stock to take a back seat. In these situations, investors ideally anticipate the company’s moves and get breathing time to graze over other stocks available for investment.

Every company listed on a trading exchange has the option to either temporarily pause or suspend their shares from being traded. Let us understand trading halts and suspension for a better insight:

Trading Halt: Temporary suspension of the stock of a company on one or more exchanges is referred to as a trading halt. Ideally and in most cases, this event occurs when the company has an announcement to make (good or bad) or rectification to be processed in order or statement that would have cropped up on a regulatory base or technical stumps.

Prior to the public announcement, the companies willing to go ahead with a halt intimate the exchange/s they are listed on about their halt’s desire and provide the reasons for the same.

Trading Suspension: Suspension on the trading of a company’s stock takes place when an exchange commission mediates in the market to end trading events to scrutinize or address serious issues on the company’s finances, operations or assets. The time frame for this event depends on the seriousness of the matter being dealt with, and for the shares to re-commence trading, the suspension has to be officially lifted. Besides this, a company can request for a voluntary suspension as well, in order to fix serious concerns before proceeding with its trading activities.

Ideally, the intervening commission informs the public about the suspension via a press release. Companies submit required details and documents to adhere to all compliances posed onto them, to ensure fast and smooth lifting of the suspension. There are a few cases of fraudulent activities too, which is followed by a deeper investigation process.

Trading halts and Voluntary Suspensions on the ASX: Companies can apply for the trading halt under the Listing Rule 17.1 and the Listing Rule 17.2 for voluntary suspension, by Australian Securities Exchange. Both these requests are not automatically granted and need to agree with, followed by a set of operational steps that the exchange implements, before making the request effective.

The ASX believes that the trading pauses should be very less. ASX also needs to be satisfied with the reason/s cited by the company for the implementation of the halt or suspension. It can also demand additional information to justify the request, and if not convinced, can inform the company that the process would not be initiated.

It should be noted that ASX allows a trading halt for a maximum period of two trading days, crossing which, a voluntary suspension should be requested by the company if the reason for the halt has not been gratified. Exceptionally though, in a scenario of an accelerated capital raising event, the two days margin can be stretched to four.

With this backdrop, let us look at three stocks, which are listed on the ASX and undergoing a phase of a trading halt or suspension, and understand their reasons to do so:

Company Profile: A leading supplier of meat and livestock to customers across the globe, WLD in an international agribusiness player that has a vertical and integrated supply chain to link producers of livestock with the customers. The company was listed on ASX in 2015 and is headquartered in Fremantle.

Stock Information: The shares of WLD last traded on 28 June 2019 at A$0.024, with an outstanding shares of around 531.25 million. The stock has generated negative return of 40 per cent, 55.56 per cent and 59.32 per cent in the last one, three and six months, respectively. Its 6-month performance is depicted below: 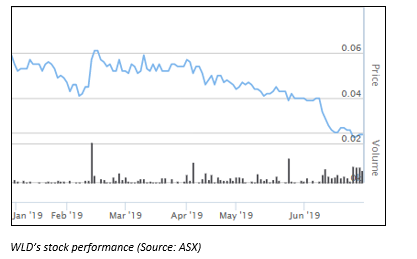 Company Profile: An audio wearables company, NUH has developed a proprietary and multi-functional intelligent hearing technology to aid a person’s hearing. The company has its base in Perth region, and has offices in cities like New York and San Francisco as well. The company was the first ever wearables technology company to be listed on the Australian Securities Exchange, in 2010.

Trading Halt: On 3 July 2019, the securities of NUH were placed in a trading halt, pending an announcement, and were due to be lifted on 5 July 2019 or post the announcement’s release, or which ever occurred earlier.

Also, on 3 July 2019, the company notified that it was in the procedure of a bookbuild for a placement of ordinary shares to the investors, to meet its ongoing funding requirements. This was regarding the receipt of a non-binding letter of intent in April 2019, from a multinational consumer electronics company, to acquire NUH’s shares. However, the Board stated that this party would no longer offer any proposal to the company, after the counterparty withdrew the LOI. 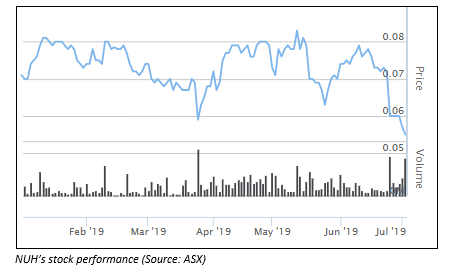 Company Profile: An explorer of silver-rich deposits in Australia and overseas, SVL was listed on ASX in 2007 and has its registered office is in Sydney. Recently, SVL purchased the Bowdens Silver Project in NSW and in the area, the company holds the Conrad and Webbs high grade silver projects as well.

Trading Halt: On 3 July 2019, it was notified to the market that the securities of SVL would be in a trading halt at the request of the company, pending the release of an announcement with regards to capital raising. The shares would commence trade on 5 July 2019 or post the announcement, whichever occurs earlier.

Stock Performance: The shares of SVL last traded on 2 July 2019 at A$0.051 with a market cap of A$35.6 million and around 698 outstanding shares, delivering a negative YTD return of 10.53 per cent. Its 6-month performance is depicted below: 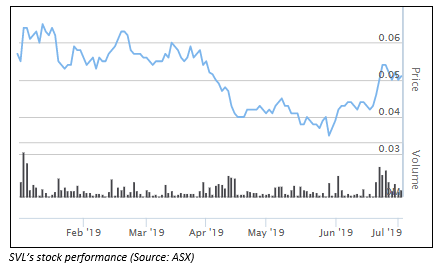