Also, on 3 February 2020, most of the sectors on ASX closed in red on ASX majorly influenced by the spreading of coronavirus. Most of the companies within all these sectors having a relationship with China impacted these sectors. When it comes to S&P/ASX 200 Information Technology (Sector), the index closed at 1,547.5, down 1% from the previous close while the benchmark index declined by 1.4% from its last close and was at 6,923.3 points.

Let’s go through the announcement/s released by these two companies to get a better insight on them.

Some of the highlights from the same are as follows:

Record sales were noted in the fourth quarter of FY2019, with solid growth across performance metrics.

With the increase in the demand and opportunity for SPT in the UK, SPT appointed Melanie Vala as VP, Europe. She replaced Co-Founder Gil Don who stepped down from the position in January 2020.

Splitit has signed a new partnership agreement with Stripe, which is a global payment technology company to integrate the solution of SPT with Stripe Connect, streamlining merchant onboarding and enhancing the merchant experience. Further, the agreement would also provide the technology to allow merchants to self-onboard to SPT’s platform.

SPT considers the partnership with Stripe Connect as the most critical one till date as it concentrates on expanding its business.

A Glance at Cash Flows during the period:

SPT reported an increase in the cash outflows during the period, consisting of the followings:

The cost incurred during the period was in line with the December 2018 prospectus. Also, the net operating cash outflow for the quarter was US$4.76 million, a fall on the previous quarter.

Link Administration Holdings (ASX: LNK) has entered into a binding agreement with Pepper Group to acquire Pepper European Servicing for €165 million (~A$266 million) and additional €35 million (~A$56 million) in case certain total Assets Under Management (AUM) limits and growth milestones are fulfilled.

Pepper European Servicing (PES) offers end-to-end loan servicing, advisory & asset management throughout residential as well as commercial segments. The business is established in the UK & Ireland supported by longstanding customer relationships along with growing footprint in the budding markets of Spain, Greece & Cyprus.

The upfront acquisition price means an Enterprise Value to EBITDA multiple of 8.2x or 6.0x after considering expected efficiency benefits along with deferred payments for current AUM protection.

The acquisition depends on relevant regulatory approvals and is projected to be completed in 2H CY2020. Once the acquisition gets completed, it would combine with the BCM business of Link Group.

Strategic rationale Behind the Acquisition:

The integration of Link Group’s BCM business with PES would create a leading loan & asset servicer of scale with high-quality management, a deep talent pool, & the required experience as well as skill to provide a powerful client proposition throughout Europe.

Citi would act as a financial advisor in this transaction. 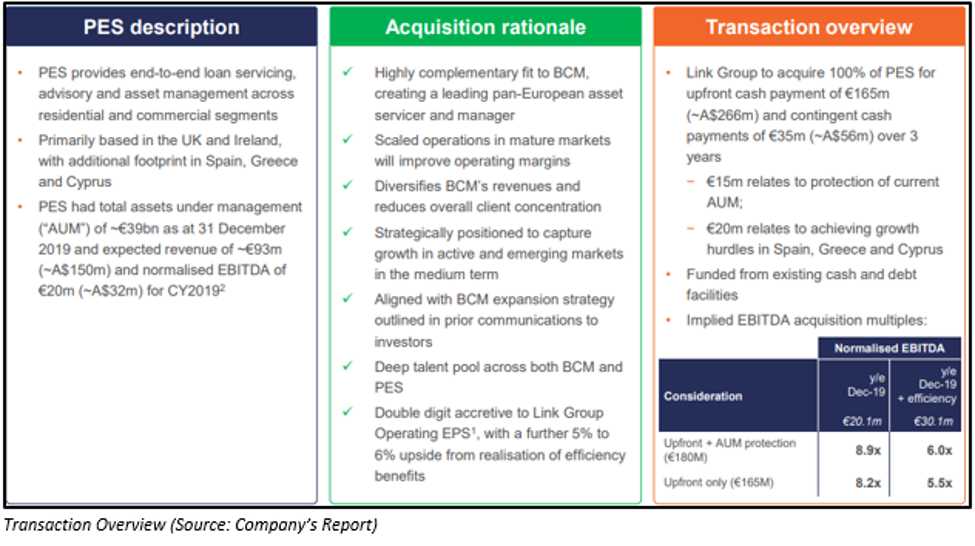