As a technology platform, Tinybeans Group Limited (ASX: TNY), operates to connect parents with the highly dependable digital tools and resources to help every family thrive. The user base of Tinybeans has touched 3.55 million members mark with more than 1.28 million monthly active users spread in over 200 countries/territories.

Based in Australia, TNY is known for operating a mobile and Web-based platform, called Tinybeans, which facilitates its users to record innumerable moments and milestones of their family and friends. Since its inception in March 2012, Tinybeans reached its 2 million user base milestone during November 2017.

Tinybeans recently announced results for its September Quarter (Q1 FY20). During the quarter, the company’s registered users hit 3.55 million mark, representing growth of over 210,000 new users in the last three months. The major highlights for Q1 FY20 are as follows:

“We’re pleased to deliver a solid start to FY20 by nearly doubling the revenues on the same period 12 months earlier. Also encouraging is that we achieved solid growth in all key metrics while beginning to make more longer-term investments with the proceeds from the capital raise”

The major part of TNY’s revenue was composed of the revenue from advertising. Moreover, revenue from increasing TNY’s premium subscription also witnessed growth during the quarter, with new users committing towards TNY. 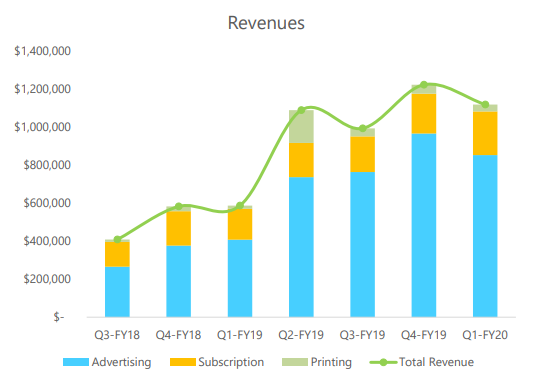 As a significant investment in the brand partnership and advertising teams during the quarter, TNY made hires with each having over 20+ years’ experience in media and data. Being far-sighted, Tinybeans anticipates gaining leverage through the expertise and associates of the hires over the coming years.

Over the quarter, TNY’ strategy of partnering with larger brands has fuelled its growth in increasing the advertising sales channel. As a matter of fact, the channel has grossed to over USD 3 million, doubling within the past two months.

Setting higher benchmarks, Tinybeans anticipates deeper and long-term partnerships with a greater number of larger brands over the year. 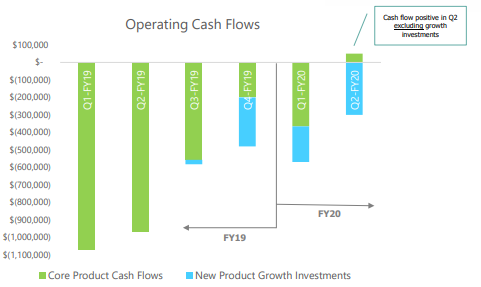 According to the TNY reports, the operating cash burn was largely determined by the following:

The company is now aiming for bigger advertising partnerships. As an implication of the above, Tinybeans assumes to become cash flow positive by the next quarter of the FY20 for the core product.

Moving steadily upwards, Tinybeans forecasts growth in revenue during Q2 versus Q1, with gross margin at around 91%.

With its 12-month retention currently standing at 75%, TNY’s culture provides a committed and budding environment for innovation and experimenting with different strategies with an attempt to increase the conversion of signed-up users to active users and ultimately to long term retained users.

TNY’s core product changes during the Q1 are as follows:

The Annual General Meeting of Tinybeans is scheduled to be held on 13 November 2019. As per company reports, TNY looks forward to inculcating technology demonstrations, providing business priority updates and access to the directors for the investors, in an attempt to make the AGM innovative for its investors.

With its global expansion, TNY looks forward to developing brand deals in the regions of mid-west and the west coast of the U.S. Moreover, TNY is currently executing its strategy to make careful investments for providing continued growth and generate diversified revenues.