Is Santa Rally really on the cards or December 2018 Dejavu on cards?

The holiday season is here, and the speculations about the Santa Rally’s calendar effect are heating up. Investors are well-versed with the term “Santa Rally” since it reflects a trend in the stock market. The investors and share traders anticipate earning money during the Christmas holiday season and New Year.

An increase in the prices of stocks witnessed in the last week of December through to the first two trading days in January majorly influenced by the factors like tax considerations, optimistic outlook towards market etc.

Investors keep high expectations with the yearly market events during December and January, expecting Santa Rally to deliver a bag full of rewards, but has equal potential to empty the investor’s basket. 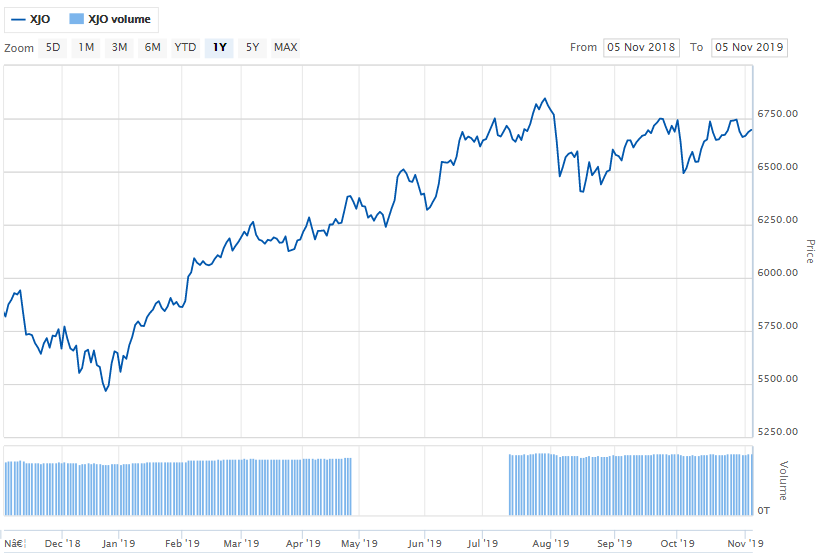 The above chart depicts the performance of the S&P/ASX200 index over the last year period. As can be seen above, the index recorded a decrease during the month of December 2018, just before Christmas. However, the index gained momentum and increased substantially after Christmas and around New Year.

The optimism towards the market is supported by the psychological happiness of the people with the year nearing a close, brokers investing their bonuses in the market before the holidays, short sellers going on holiday and an anticipation of the January effect.

Now is the time of the year that we find out if Santa is on his way for the investors with a bag of goodies or a lump of coal.

The interest rates in Australia are at a record low currently. The Reserve Bank of Australia (RBA) has proactively cut interest rate and eased the monetary policy to boost the local equity market.

The RBA cut interest rates to a record low of 0.75% to avoid any unnecessary upward pressure on the Australian Dollar. However, it is rapidly losing firepower, particularly as it seems increasingly likely that the U.S. Federal Reserve could be forced into a more aggressive rate-cutting cycle than it currently reflects.

A more appropriate and inexpensive way to capitalise over the falling Australian Dollar is through investment in a currency ETF listed on ASX. By investing in the currency ETFs at this time of low Australian Dollar, the investors can gain untainted exposure to benefits from the Australian currency.

Australia witnessed significant political instability over the last decade, but with the conclusion of 2019, federal election is expected to keep the political scenario more stable in Australia. Political uncertainty creates ambiguity within financial markets, thus impacting the real economy through the share of investment.

The sentiments in the Australian equity market is significantly driven by the activities in the US stock market. However, with the United States presidential election scheduled for 2020, there is expected to be high volatility in the US equity market.

Along with the considerable impact that elections have on the macro-economy of a nation, it also influences the market uncertainty and volatility. Therefore, it becomes necessary to discuss the various aspects which connect the Australian equity market with the US and could potentially govern the Santa Rally for this year.

Australian Economy Expected to Grow by ~ 2¼ %

The RBA forecasts the Australian economy to further grow by approximately 2¼ % in the current year and the growth to subsequently move up to around 3% in the year 2021.

The anticipated growth is expected to be fuelled by low-interest rates, recent tax cuts, current spending on infrastructure, the increase in housing prices in some markets and a positive outlook for the resources sector.

In addition to this, the easing of monetary policy is seen as an influencer to employment and income growth in Australia and a return of inflation to the medium-term target range.

As noted from the past year, the Santa Rally kicked in with a delay due to the investors’ jitters about the US-China trade war. Following the shutdown of the US government and the US Federal Reserve raising interest rates further weakened the market last year, but the market gained some strength after Christmas.

As it is clear from the chart above, the S&P500 index witnessed a dip during the month of December 2018 just before Christmas and it further increased in the month of January. The S&P500 had hit its all-time high on Monday 04 November 2019.

No matter how hyped or anticipated the Santa Rally is, the effect of the same is not obvious every year with variations in the magnitude. With RBA predicting a positive outlook to the Australian economy in future, and macro-economic factors aligning with market growth, the expectations of the investors might be expecting goodie bags this Christmas.

With just the beginning of November 2019, it may be too soon to say that we have entered the Santa Rally but with the favourable outlook it is likely that stocks may perform better going forward.