Is Brazil now ahead of the US in terms of soybean production?

As per a report from the Economic Research Service, more than 60% of global soybean imports are accounted for by China, while the soybean supply from the United States and Brazil forms over 80% of the global exports.

But what makes such an area of competition for the countries? Did we just find the food fit for the gods?

Soybean is the world’s most important bean economically since it provides vegetable protein for countless people.

According to the Victoria State Government, the soybean has following characteristics:

The consumption for the soybean is expected to continue to grow with the increasing consumer income and as urbanization alters traditional consumption habits.

The below table shows the production of soybean in the world for the year 2018: 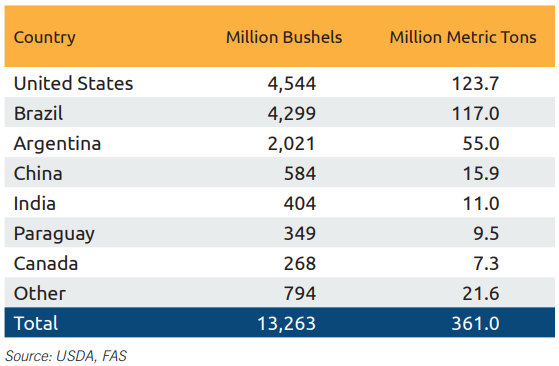 In the year 2018, the international agricultural market witnessed some serious speculations in relation to the top soybean-producing country in the world. Several forecasts surfaced, and estimate reports reflected the increasing Brazil’s soybean production fuelled by several events - US-China trade tensions being a key consideration in almost every forecast.

Soybean Demand side factors from China

To some extent, the production of soybean in brazil witnessed improvements. The USDA’s GAIN Report dated 28 September 2018 highlight the following results:

Most analysts are of the view that in the longer term, the conversion of reduced pastureland in the Brazil’s cerrado area shall help to generate substantial soybean hectares. During first season plantings in Parana and Rio Grande de Sul, the producers have already started distributing 9 out 10 ha of arable land for soybeans.

Brazil witnessed an increase in planted area for the 2018/19 crop, largely fuelled by the producers’ constant confidence about the valuation of Brazilian soybeans to increase.

The domestic soybean prices were seen rising noticeably, pulled up by strong demand from China, since the beginning of the calendar year.

Moreover, unending and long persistent US-China trade tensions bringing in the implementation of a 25% duty on US soybeans by China in April, Brazil witnessed a rush in Chinese demand for its soybean crop, dramatically lowering the demand for US soybean, worsening price pressures from this year’s bumper crop.

Notwithstanding the above scenario, the plunging value of the Brazilian currency would have still delivered strong returns to the Brazilian producers. 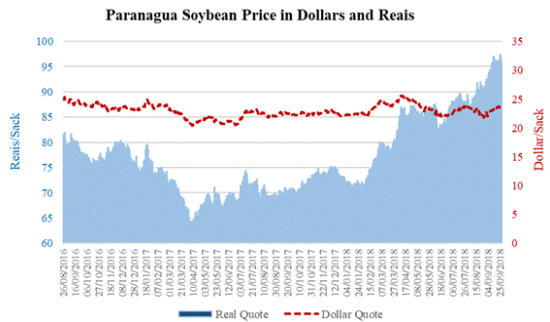 The above chart reflects the relatively constant US dollar price, FOB Paranagua over a period of two years, including the time when China first introduced tariffs. However, there has been a decrease in the value of Real against the dollar by approximately 25%.

During January 2018, the FOB Parangua price for a sack of soybeans hovered around R$70 which hit close to R$ 100 by September 2018, becoming the major factor leading to the expected increase in soybean planting during the current year and gains for Brazilian producers.

Brazil’s exports for Soybean for MY 2018/19 (February 2019 to January 2020) are estimated to reach a 75.5 mmt setting a record, based on the assumption of continuation of government policies that are currently in place.

The demand for Brazilian soybeans is expected to remain higher, with China’s persistent in imposing duties to US soybeans.

The USDA’s Oil Crops Outlook dated 13 November 2019 estimates the US average yield for soybeans to be fractionally lower at 46.9 bushels/acre.

At the same time, Post’s sources indicate that the demand for soybeans in China is expected to remain low for the upcoming year, while soybean exports to China from smaller suppliers, especially Argentina, might increase.

With very strong exports of soybean products so far this season, Brazil recorded an upturn in month-on-month export sales of soybean meal every month, with an average monthly increase of nearly 30% in the first seven months of the MY.

CLICK HERE FOR YOUR FREE REPORT!
Tags:
US Soybean brazil