The key factor that drives price performance is demand and supply. If the demand of a stock increases and supply decreases, the prices rise and if the demand decreases and supply increases, prices fall. The relationship between demand and supply is very sensitive to the news flow at the moment. Normally, bad news has led investors to sell stocks and thus creating an increase in supply and decrease in demand. This triggers prices to fall. The opposite happens, when there is good news in the market.

In this article, we will see the effects of news on the prices of stocks.

Resolute Mining Limited is engaged in the business of gold mining, development of resource projects and prospecting and exploration for minerals

The Company Announces Debt Repayment of US$130 Million

The company has repaid US$130 million acquisition bridge facility which funded the cash component of the company’s acquisition of Toro Gold Limited. Reimbursement of the facility was financed from proceeds of Resolute’ s recent effective equity raising in blend with accessible cash on hand. This reduction in debt will lessen the company’s continuing interest payments and total cost of borrowing in addition to abridging its capital structure.

Resolute Mining Limited has signed an agreement for the divestment of the Ravenswood Gold Mine in Queensland to a consortium involving Golden Energy and Resources and EMR Capital.

Recently, the company released its guidance for FY20, and it expects to increase its production to 500,000 ounces this year, which is about 30% higher on year on year basis.

The company also reported production for 12 months to 31st December 2019. Key highlights are:

Newcrest Mining Limited is into exploration, development, mining and sale of gold.

The Company Decides to Divest Gosowong Mine

The company has authorized an agreement to sell 100% of NSH which holds a 75% interest in PT Nusa Halmahera Minerals, which manages the Gosowong mine in Indonesia. Key Highlights of the agreement:

Executive Changes at The Company

The company has announced some adjustments to the structure of its Executive Committee. After the changes, the company’s committee will compromise:

The company has been given a Major Project Status from the Australian Government to create its new Rare Earths handling plant in Kalgoorlie, WA. Major Project Status officially acknowledges the strategic importance of the scheme to the Australian economy and offers a single-entry point for Commonwealth Government agreements as well as project assistance and management and aid with State government approvals.

The factory is projected to generate up to 500 jobs through peak construction and boost the company’s staff in the Goldfields to more than 200 people. The company plans to operate the plant with a residential, local staff and maintain its relationship with WA School of Mines and Curtin University.

The company has provided updates related with the Permanent Disposal Facility (PDF).

State Government of Pahang has announced its permission to a location for the PDF for Water Leach Purification (WLP) excess. The authorized location is a secluded site around the Bukit Ketam area. Based on initial due diligence performed by the company and its advisors, the company believes the site will be appropriate as the site of the PDF.

The company has selected Gading Senggara Sdn Bhd for the contractor to handle the whole PDF project, involving operation, design, construction and institutional control throughout post-closure of the capacity for a time period to be determined by the regulatory authorities. The approximate total amount to be there paid to GSSB for management of the entire PDF project is US$98 million, as reviewed in the table below. 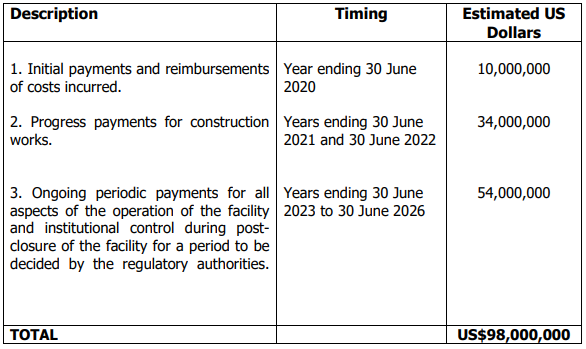 The company has provided its operating and financial results for the December quarter, 2019

MMGO produced 33,235 ounces during the December quarter at an MMGO AISC of $1,737/oz. Total production for 1HFY20 was 75,237 ounces, in line with the company’s guidance of between 67,000- 77,000 ounces. AISC for the 1HFY20 was $1,562/oz, with guidance expectations of costs being higher over the 1HFY20 versus annual guidance of $1,400-$1,500/oz. Lower gold production when compared to the September quarter was primarily a function of a lower average mill feed grade. The mill feed grade was in line with forecast expectations due to mining lower grade ore zones in both the Westralia underground and more specifically, the Jupiter open pit. 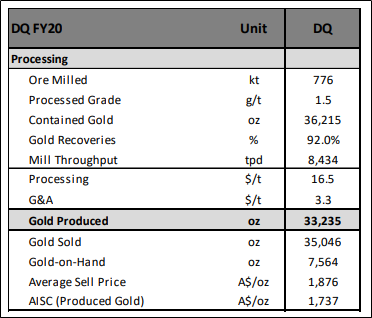 The stock of DCN has been suspended from quotation immediately, at the request of the company, awaiting the release of an announcement regarding an update to its Ore Reserves, Mineral Resources and life-of-mine plan. The total outstanding shares of the company stood at 228.43 million.