Glencore Plc is again under investigation; this time it is the U.S. Commodity Futures Trading Commission who is probing against the company, which previously faced many allegations of bribery and corruption. The U.S. Commodity Futures Trading Commission (CFTC) is currently examining the mammoth over the possible corrupt practices.

The recent probe by the CFTC signifies that the company is under intense investigation by the authorities of various countries such as the United States, Brazil, etc., for unethical business practices in resource-rich countries such as the Democratic Republic of Congo (DRC). Glencore is now facing a multitude of bribery and corruption investigation, which reminds us of the time, when Glencore’s founder, Mr Marc Rich, was prosecuted for potential tax evasion.

Such legal binding and challenges could hamper the company’s sustainability over the long-run especially at the time when the company is planning to buy back a significant number of shares from the market and is arranging for the capital. The company recently followed the footprints of Rio Tinto (ASX: RIO) and exited the coal business.

The exit from the potential business amid the increased demand from the investors led the company to post a loss in the financial year 2018. As per the annual report of the company, it spent $24 million in legal costs in the year 2018.

The effect of such business losses and high spending on lawyers is now reflected on the share prices of the company. The prices dropped significantly from its recent high of GBP416.91 (January’s 2018) to the level of GBP268.35 (December’s 2018 low); March’s low recorded at GBP293 . The substantial fall in prices marks a significant decline in the shareholder’s wealth, and the investors are taking all precautionary measures prior to exposing to the company, whose ethicality is in question. 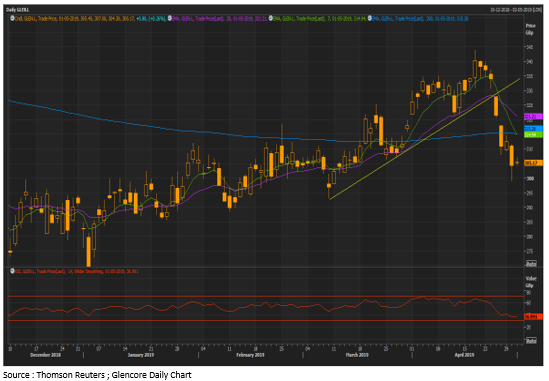 On following the development on the daily chart, it can be seen that the share prices of the company broke an uptrend line and dropped significantly. The prices are currently trading below the trio of 7,20,200 days exponential moving averages (EMA). The 7-days EMA is at GBP 314.94 and recently crossed the 20-days EMA, which at GBP 321.21. A death cross-over (bearish signal) emerged on charts recently when the 7-days EMA crossed the 20-days EMA from above. The prices are also currently below the 200-days EMA, which identifies the long-term trend as downtrend, the 200-days EMA is at GBP 315.26. The shorter term 7-days moving is slipping below the 200-days EMA, which could contribute towards a further fall. The 14-day Relative Strength Index is Value at 36.991, which is below the mean value of 50.