Cannabis, also known as Marijuana or pot has been used by mankind since centuries. Cannabis or Marijuana is a dried flower extracted from the plant; “Cannabis Savita” which is also known as hemp. The plant is believed to have originated from Central Asia, mainly in Mongolia and southern Siberia. Since ancient times, cannabis has been used as go-to medical herb with its medicinal properties suitable for solving psychological problems including depression. However, the positives of cannabis are outweighed by its psychotic effects, since smoking cannabis induces psychotic effects and can cause hallucinations, dismantled thoughts, unusual behavior that led to banning the use of cannabis by almost every country and hence was considered a “taboo”.

The situation, however, is changing across the globe with extensive research being carried out on cannabis in the last few years that have led to many fascinating discoveries of cannabis pertaining to the health care sector, shifting the focus from a taboo to a magical plant for medicinal purpose. Moreover, in the recent years, cannabis has become one of the highly discussed subjects around the world.

Classified as a cannabinoid drug by the Alcohol and Drug Foundation, Cannabis has been known to treat a wide range of diseases and symptoms including- 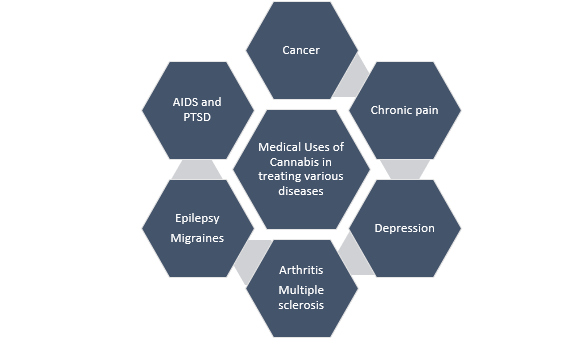 The cannabis industry witnessed massive hype post its legalisation for recreational purpose, changing the cannabis landscape across the globe. More than fifty countries around the world have now legalised cannabis for medicinal purpose, while six countries including Canada, South Africa, Uruguay, Georgia, Guam, and the Northern Mariana Islands have legalised it for personal or recreational use.

Canada became the first industrialised country to legalise recreational cannabis in October 2018. North America “going green” played a significant role in tripling the cannabis revenue from $3.4 billion in 2014 to $10.9 billion in 2018.

In United States, medicinal cannabis has been given a green signal with 12 (including Illinois) permitting cannabis to be used for consumption in adults for recreational purpose and/or retail sales and additional 33 allowing only for therapeutic use, representing a huge opportunity for cannabis sector to unlock the potential of the world’s largest cannabis market.

In 2019, the U.S. House Judiciary Committee approved a bill that legalises cannabis on the federal level to eliminated cannabis from schedule 1 under the Act of controlled substances. Nevertheless, Cannabis industry came under speculations and pressure towards the end of 2019, due to rising deaths from consuming vaping.

As per an investment bank, the US cannabis market could perhaps be worth US$28 billion at present, had cannabis been legalised across all the states. Thus, if there is a favorable outcome regarding the legalisation of cannabis, the cannabis stocks in the US will get a big boost.

In Australia, cannabis has emerged out as a dynamic and fast developing sector with strong prospects of growth. Post legalisation in February 2016, Australia’s medicinal cannabis industry is rapidly flourishing & winning immense attention from collaborators and investors to reach a net worth of ~$55 million by 2025.

The Australian Capital Canberra became the 1st city to legalise cannabis for recreational possession, use as well as cultivation of small amounts of cannabis after the law was passed by the ACT Legislative Assembly in September 2019. This law has recently come into effect on Friday 31 January with Canberrans now authorised to own the drug and even grow the plant at home with a limit of 2 plants/person and 4/household and each person will be allowed to be in possession of no more than 50 grams of dried cannabis.

However, it contradicts federal laws that make cultivation and possession of cannabis a criminal offence and its still not clear whether these federal laws will continue to be enforced in the ACT. Furthermore, it was reported that more than 7,700 approvals have been granted till May 2019, since the government have legalised cannabis for medicinal usage.

As the Green Rush skyrockets into a new decade, the cannabis legalisation is going to go global. Driven by a strong CBD’s demand, Hemp (the source for CBD in many non-psychoactive products) will expand all over the world as well. The CBD market is anticipated to grow to $2.1 billion in consumer sales by 2020 as per some reports, including $450 million of those sales occurring from hemp-based sources.

In anticipation that customers will begin to insist on CBD standards, the CBD product market is expected to mature with science-driven randomised clinical studies for the development of CBD products that addresses high quality standards and set guidelines in testing and manufacturing.

According to the Global Cannabis Report, it is estimated that the global legal cannabis market to be worth up to US$103.9 billion by 2024, mainly driven by the thriving global medicinal cannabis market with a value of US$62.7 billion.

Presently, cannabis comes under a Schedule I substance list, and until it is taken off the list, medical research remains challenging to undertake. However, researchers see a possibility of some positive movement in this direction which might boost medical cannabis research in future.

Cannabis manufacturers and producers are shifting their focus from growth at all costs to creating viable, profitable businesses targeting on strategies including collaborations, revisiting their pricing, increasing awareness and knowledge around cannabis benefits, and bring out new products including concentrates and edibles.

With the Western Australian Government announcing legislative changes to cannabis prescription approval procedure aiming to target patients’ easier access to medicinal cannabis, it is predicted that these legislative changes may give rise to medicinal cannabis prescriptions at a reduced price. Given, mounting indication of its medicinal benefits, large number of companies investing in the cultivation of cannabis including increasing acceptance of cannabis with global market that looks favourable, cannabis stocks might see investors pouring in money.

Let’s have a quick look at seven tips for investing in Cannabis stocks: