Brokerages have started to turn pessimistic for the dividend outlook of the banking industry. And, this bodes well given the fact the banks are operating under significant pressure, including lower interest rates, emerging cost pressures, and increasing competition.

According to media sources, Morgan Stanley expects Australian big four banks to report an average EPS fall of 8.4 per cent, and it notes that bushfires are likely to result in domino affects through impacts on the near term economic activity and interest rates.

Lower cash EPS would be due to lower interest rates, tightening lending standards, and multi-year reinvestments in technology, compliance and products. Some other risks include fintech disruption and regulatory changes to capital management requirements.

As a result, the broker anticipates that banks might lower dividend pay outs in a bid to meet stringent capital requirements. All the domestic banks are believed to be downgrading earnings, and returns on equity cycle augment with additional risks of dividend cuts and valuation de-ratings.

Lower-interest rates are designed to cut the cost for businesses to borrow, encourage investors to take more risk and extend money to enterprising companies. As a result of lower interest rates, the mortgage rates come down as well, enabling households to borrow more or save on the interest payments on their existing mortgages.

However, the problem for the banks arises when banks have to cut the deposit rates in order to pass the interest-rate cuts. Indeed, it is challenging for the banks to cut deposits rates consistently with interest rate cuts and maintain the level of similar deposits amid such cycle.

Thus, the depositors may try to find options that yield better than the savings bank account. When banks try to maintain the same level of deposit rates, it might impact the net interest margins of the banks.

Australia is witnessing a steady rise of new fintech companies, and the digital financial advice start-ups have been optimistic, following the scandals revealed by Haynes Royal Commission.

Digital financial advice business has been capitalising on the disruption caused by the Royal Commission, and the consumers are gradually shifting towards new age solutions.

The traditional financial advice businesses had come under a scanner, and many undertook significant divestments of the advice business. And, this has proved to be a tailwind of emerging companies in the space.

Open Banking has been delayed further to July 2020 from February, according to the statement by the Australian Competition & Consumer Commission (ACCC). It was noted that the further implementation work and testing would be completed to ensure security and privacy concerns are addressed properly.

While open banking is delayed temporarily, the potential effects of open banking are inevitable. It is a good news for consumers but potential headwinds to banking profits.

Open banking is set to allow consumers to share their data to a broader industry that is held by default banks, and this includes the previous income, expenses, and debt repayments.

Experts from the industry have a view that the potential impacts of this regime on the profits would take time. Ultimately, the development is likely to ramp-up the competition in the banking industry of the country.

Moreover, it would make switching the banks a lot easier than presently. And, this regime is arriving at a time when the banking industry in the country has been facing severe damage to brand names, following the Haynes Royal Commission.

According to the Australian Bureau of Statistics, in September quarter, the gross domestic product depicted a growth of 0.4 per cent from the June quarter, and 1.7 per cent over the year, both on seasonally adjusted terms.

The September quarter increase was driven by growth in expenditure on essential goods and services, while a fall in discretionary spending was noticed.

However, the ABS numbers also depict an increase in household savings ratio, which firmed up to 4.8 (seasonally adjusted basis) due to a decline in income tax payable. 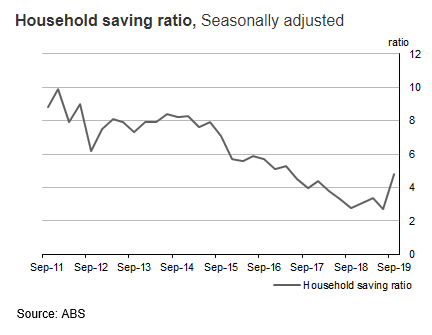 Recently, the Australian Prudential Regulation Authority (APRA) has published 2019 Year in Review, a first of its kind. It said, the financial institutions encountered low economic growth with intense focus on governance and culture in 2019.

In 2019, the housing credit in the country grew at a historically low rate over the previous year to September. However, household debt continued to grow faster than household income.

At the end of June 2019, the assets with the ADI industry stood at $4.54 trillion, and the big four banks held 75 per cent of these assets. The profitability in the industry was healthy but impacted by:

In 2019, the regulator had by the new operational risk framework and held discussion with the industry in relation to risk weights and capital framework. Also, the regulator directed major banks to increase total capital by three percentage points of the risk-weighted assets by 2024.

In addition, the regulator also implemented new requirements to increase the loss absorbing capacity of the largest Australian ADIs. And, there were developments in residential mortgage lending, exposures to related entities and credit risk management.